I am so so so excited about today’s post!! I’ve been wanting to bring back my NYC Diaries series for forever. My first (& only) post was back in March 2016 and although the photos weren’t great and it was so new for me, it got a really great response. So since I’ve been staying at the boyfriend’s place lately and eating my way through the Lower East Side, I wanted to share 5 places that I’ve tried recently and a few thoughts and tips if you’re thinking of visiting. All of these photos were taken with my iPhone 6+ so sorry that they’re not the best quality and I’m not a food blogger so taking great food shots is not my speciality, but I’m really proud of this post and I really hope you guys enjoy it. So here we go, my NYC Diaries, where to eat & drink in the Lower East Side! 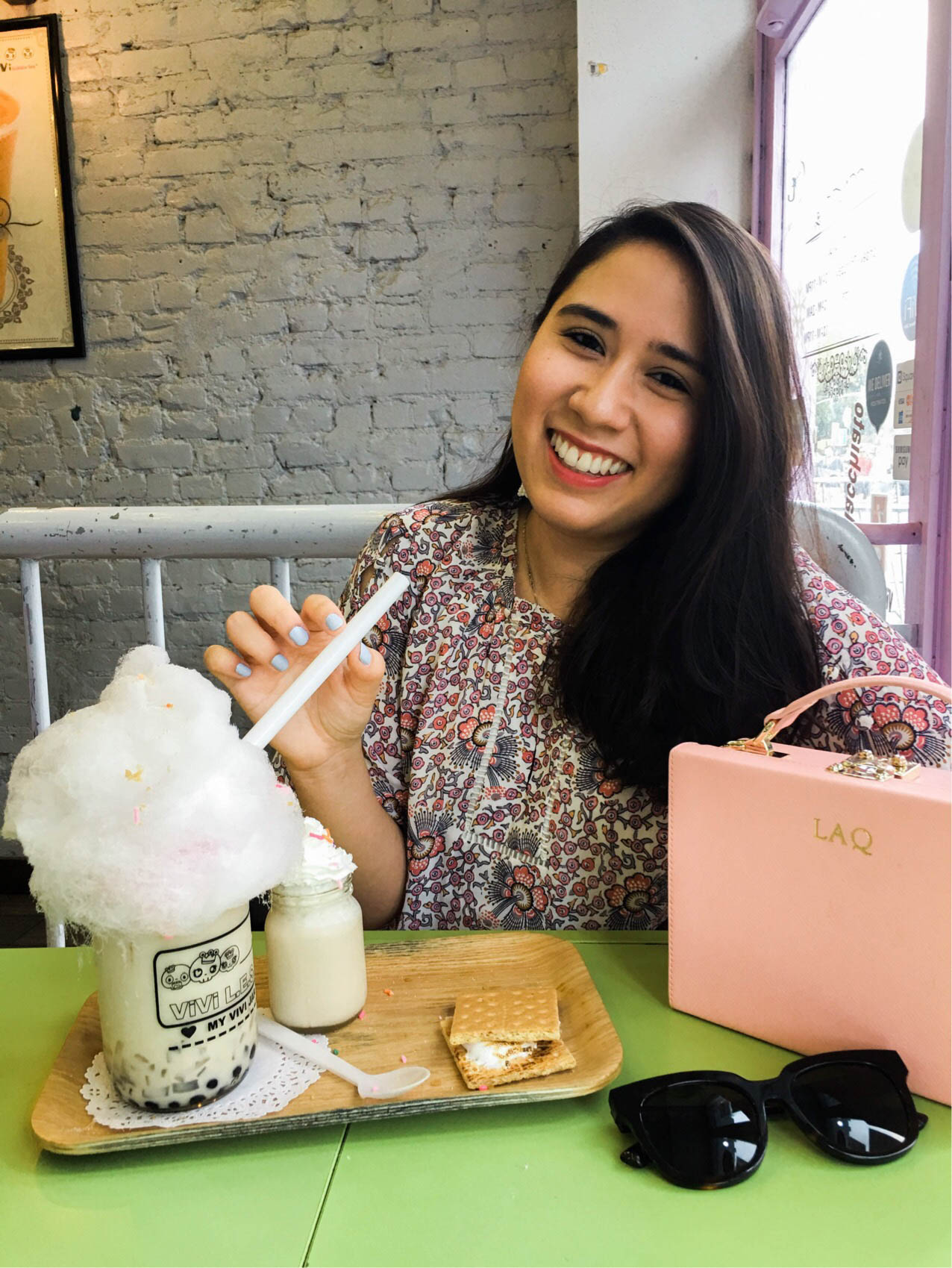 You guys know my love for bubble tea and I think Vivi makes the best. So when I saw that they had bubble tea in a mason jar with cotton candy and it pretty much went viral on social media, I was so confused how I didn’t know about this earlier. This is literally the ultimate bubble tea experience. I got the jasmine milk tea float with bubbles and lychee jelly and it came with cookies n cream ice cream inside, cotton candy with pop rocks on top, a graham cracker and marshmallow so you could make an ice cream sandwich and a small shot of bubble tea for you to melt down the cotton candy. They had a few different flavors, including a nutella one that looked amazing, but was unavailable when we went so my boyfriend was pretty disappointed. I wanted to stick to an original one for my first time and was not disappointed at all.

It wasn’t that pricey either, which I was happy about since I expected it to be. I think a classic bubble tea is about $4 and this speciality float was $7. They had pretty decent seating available, but I will say, getting the float would be difficult if there are no available tables since you really need to sit and experience it. They brought it to our table and since it was our first time, explained to us what to do which I thought was really great. If you love bubble tea, you’re for sure going to love this and it really is such an experience. If you’ve never had bubble tea, I recommend trying an original one first before getting a float. And just to note, this is the only Vivi bubble tea in the city that offers floats so don’t be surprised if you visit another one and don’t see it there! 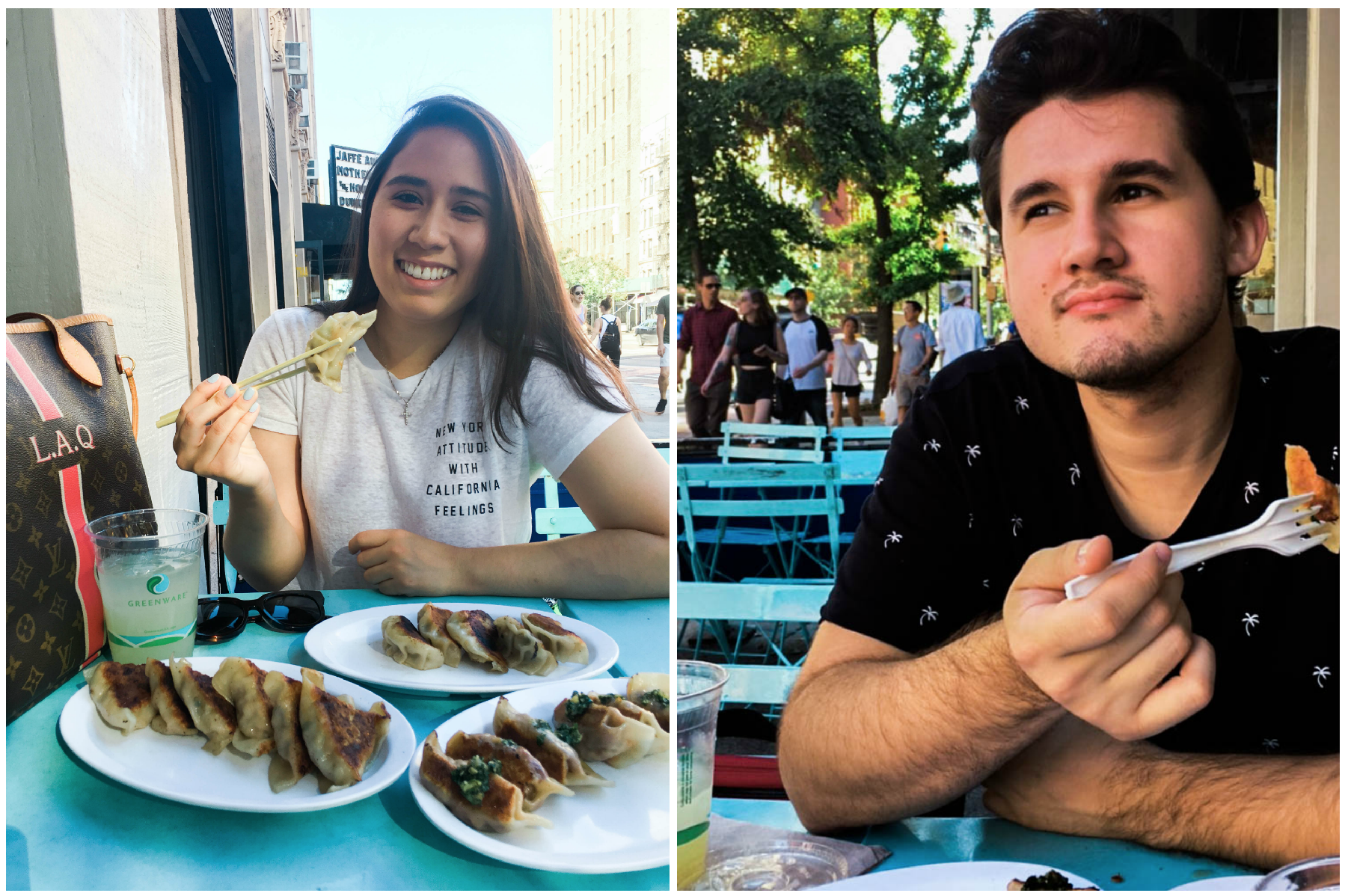 Oh man, where to start with this one… I had heard so many people rave about this place and they have pretty decent reviews on Yelp. Again, they’re pretty popular on social media especially since they have blue tables and chairs which make for a decent photo. But, I have to be honest, I HATED this place. I have a bad taste in my mouth right now just thinking and writing about it. Their dumplings are overpriced with 6 being about $9 and 8 being about $11 and if you get a speciality flavor, it’s about $12. When Eddie and I went, we ordered two of the original flavors and one of the speciality flavors and two lemonades. When you order, they give you a number for you to put on your table so they can bring the food to you. The lemonade came in a to-go cup, which is great, but they didn’t have straws…. I don’t know if this is an always thing or if they were out, but it was weird and rubbed me the wrong way. The tables were pretty dirty and sticky and it didn’t seem like anyone was making an effort to clean up. At times, I noticed people having to wait to order because the staff was having side conversations with each other.

When they finally brought the food out to you, they would bring one plate and then ask you if you ordered anything else and then bring another one and ask you again. I just feel like there is a more efficient way to give the food out or I even could have picked it up from the register rather than continuously reminding them what I ordered. The dumplings themselves were just not good. I don’t know how to explain it, but it was really gross. I love dumplings and have eaten a ton in my lifetime. There have been times where I’ve had ones that weren’t great, but still eatable. We couldn’t even finish these because they had such a strange taste to them. How do you mess up a classic dumpling?? They have a speciality sauce which I didn’t understand nor did I like. You had to ask for soy sauce, which is fine, but just seemed strange that you had to ask. I’m asian so I love an authentic experience and I’m all for a $5.95 dumpling situation from the Chinese restaurant so this was a no for me. The staff and customers were pretty American (pretty much, not Asian) so I should have known it would have been a different take on dumplings. While it made for a good photo, it’s a definite no for me. 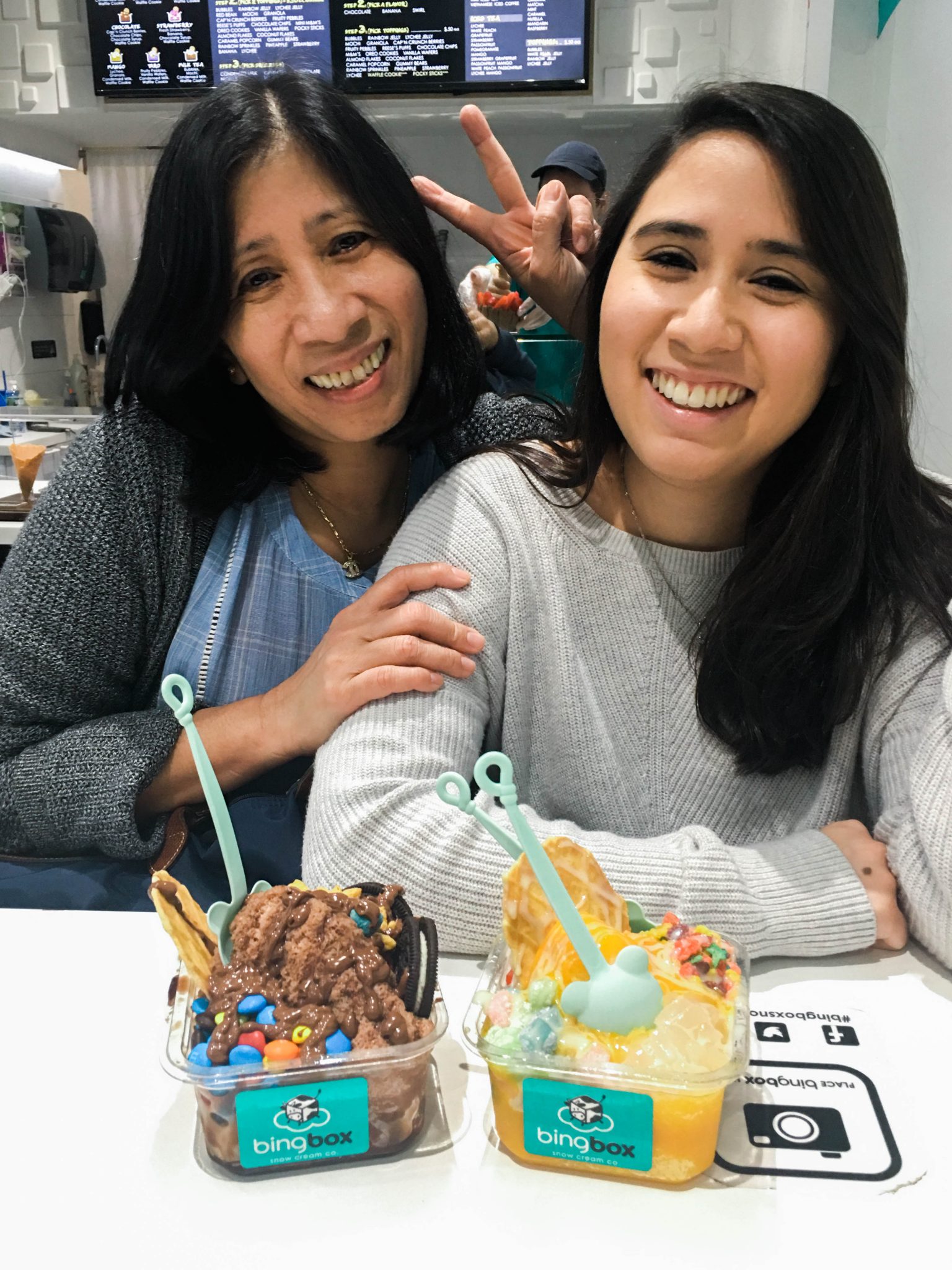 After the horrible and disappointing experience at Mimi Cheng’s, I was craving a genuine Asian experience so we walked back a few blocks to Bingbox and was not disappointed at all. The staff was super nice and friendly and patient while we figured out what we wanted. They serve soft serve, a variety of drinks and their signature shaved ice dessert. I got the create your own bingbox and chose the mango shaved ice with lychee jelly, rainbow jelly, bubbles, mochi and fruity pebbles with a condensed milk drizzle that I shared with my mom. Eddie got a chocolate based shaved ice with oreos, m&m’s and captain crunch with a chocolate and nutella drizzle. The waffle was complimentary!

Seriously so light and refreshing, I’ve already been back twice. They have a loyalty card that they punch on each of your visits and I believe after 9 you get a free one. They only have three tables with four seats at each and one bench so seating is hard to come by. I haven’t had a problem, but I’ve seen people who had. This is definitely a dessert where you want to sit down and relax since it’s not that easy to transport so I would wait it out. There is a bit of wait between orders. I personally haven’t complained nor do I think it’s a problem, but just wanted to point it out. I believe they only have one machine to make the shaved ice and they have to switch out the flavor and clean it between orders since everyone gets a different flavor. It’s not bad though! I would say, I get my bingbox about 5 minutes after I place the order and Eddie gets his 5 minutes after I get mine. Would highly recommend! And there are a ton of places to eat at and bars nearby so it’s a nice treat after dinner or too much bar time! 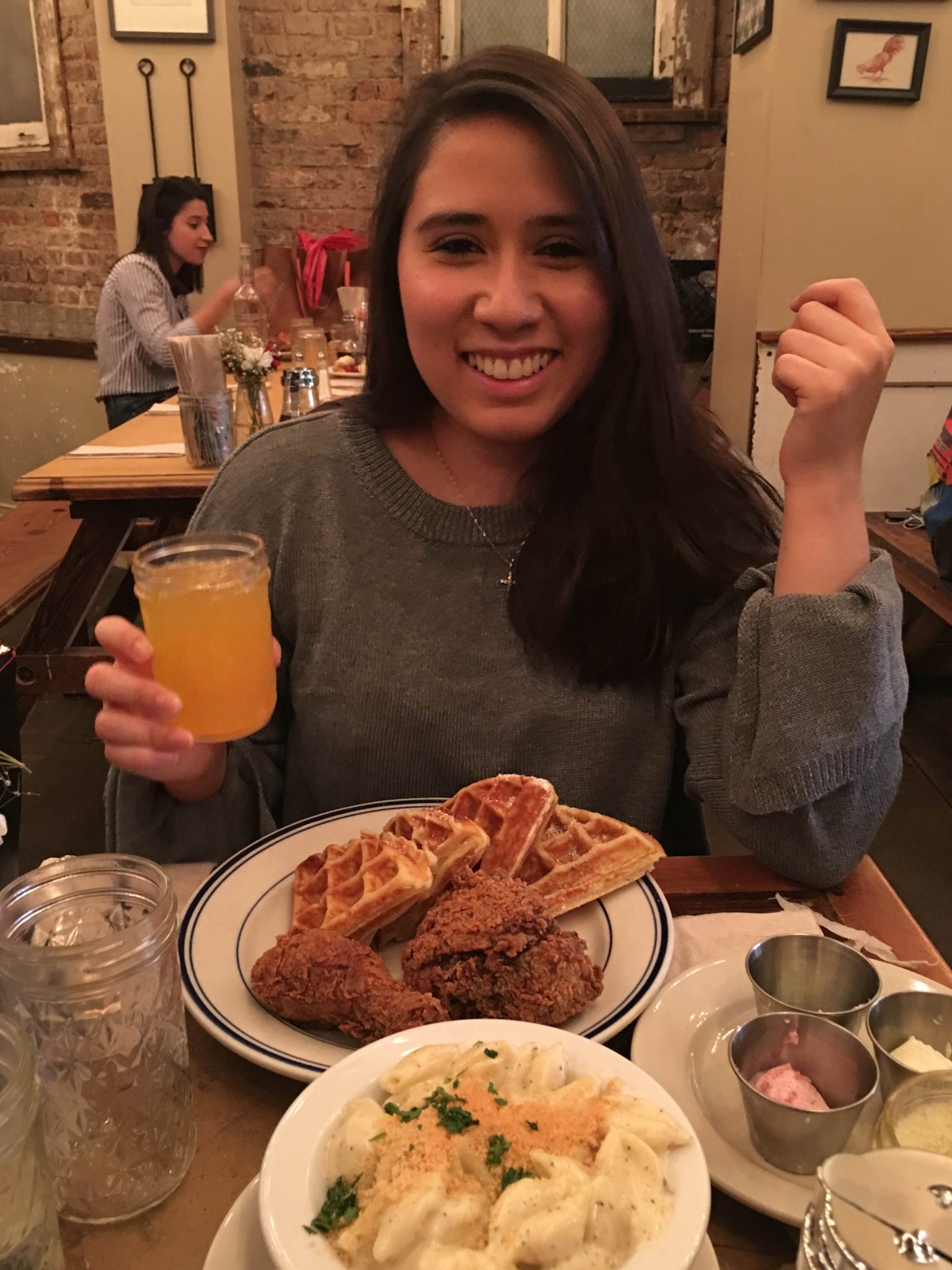 I tried Sweet Chick for the first time when I went out to dinner with my best friend Kyle. We were originally going to try a Chinese restaurant, but at the last minute changed our plans because I was craving some chicken and waffles and we both wanted to have a drink after a long week. They don’t take reservations, although I just went this past weekend and saw one large group have a reservation so I feel like if you have a big party they may allow it. We arrived pretty early for a Friday night and didn’t have to wait to be seated. However, as it got later, we saw there was a crowd waiting and Eddie and I just went for brunch and had to wait 20 minutes so they do get pretty crowded. The place is small, but I love the vibe of the restaurant, especially with the exposed brick walls.

The mac & cheese is truly the standout star for me. I love mac & cheese, but I’m pretty picky about it. I typically don’t like large shells in mac and I’m not a huge fan of breadcrumbs, but this was honestly so amazing. Eddie and I shared one when we went for brunch and we’re pretty satisfied. Kyle & I tried to share one and when we realized it was so amazing, had to order a second one. The chicken & waffles were great and if you go for dinner, they have different waffle flavors, but they just offered the classic for brunch. When I went for dinner, I got their boozy lemonade which was great and when I went for brunch I got a bellini. The only con of this place is that the tables are super tiny. They definitely utilize the tiny space as best they can, but twice I’ve just felt like it’s such a tight fit and wish I had more room to spread out. And if you sit towards the back, it gets pretty hot. But, the service is amazing. Everyone is so nice and helpful. Twice I’ve gone and haven’t had a designated waiter, it just seems like everyone is willing to help and serve you which gives it a great community vibe and they treat you as if they’ve known you forever. Between the food and the service, it totally outweighs the small cons. 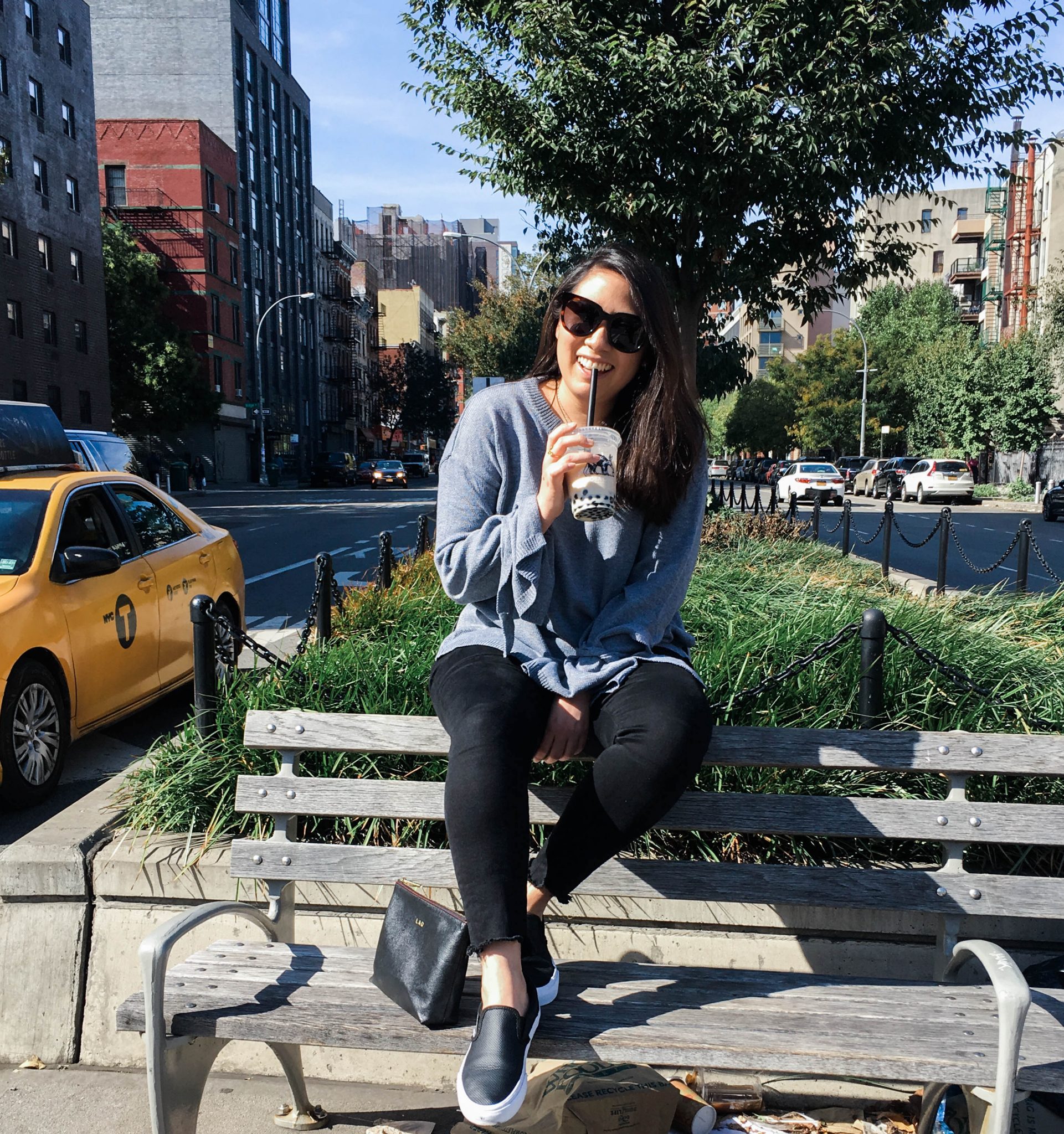 As much as I love bubble tea, I’m a tough bubble tea critic. I am ride or die for Vivi and haven’t really found a place that lives up to them. I saw Boba Guys on Facebook, I think in one of those Insider videos and to be honest, didn’t really have an interest to try because again Vivi is my life. But, Eddie and I were heading to get bagels one Saturday morning and I was so surprised when we passed it. I didn’t realize it was so close to where he lived. So I figured why not give it a try. Since I wanted to revive my NYC Diaries series, I wanted to make an effort to try everything.

The place was pretty nice and the menu was pretty simple to understand. Not as many options as Vivi, but they have more speciality options like a horchata one and a matcha one. The guy at the register was super nice and offered to help answer any questions we had. I ordered a jasmine milk tea with bubbles. I have to say, I was pleasantly surprised. I love hot jasmine tea so whenever I see a cold option available, I jump on it. I’ve gotten jasmine tea at Vivi before, which by the way is not on the menu, but when I asked they had and wasn’t a huge fan. But, Boba Guys jasmine milk tea was great. I’m super simple when it comes to bubble tea so there isn’t really anything else on their menu that I want to try, but I think if you’re a bubble tea newbie you would like this place since its not overwhelming.

Thank you so much for reading! I really hope you guys enjoyed this post. I like the idea of reviewing 5 spots in each post and I’m for sure going to continue this. Thanks again and have a great week!