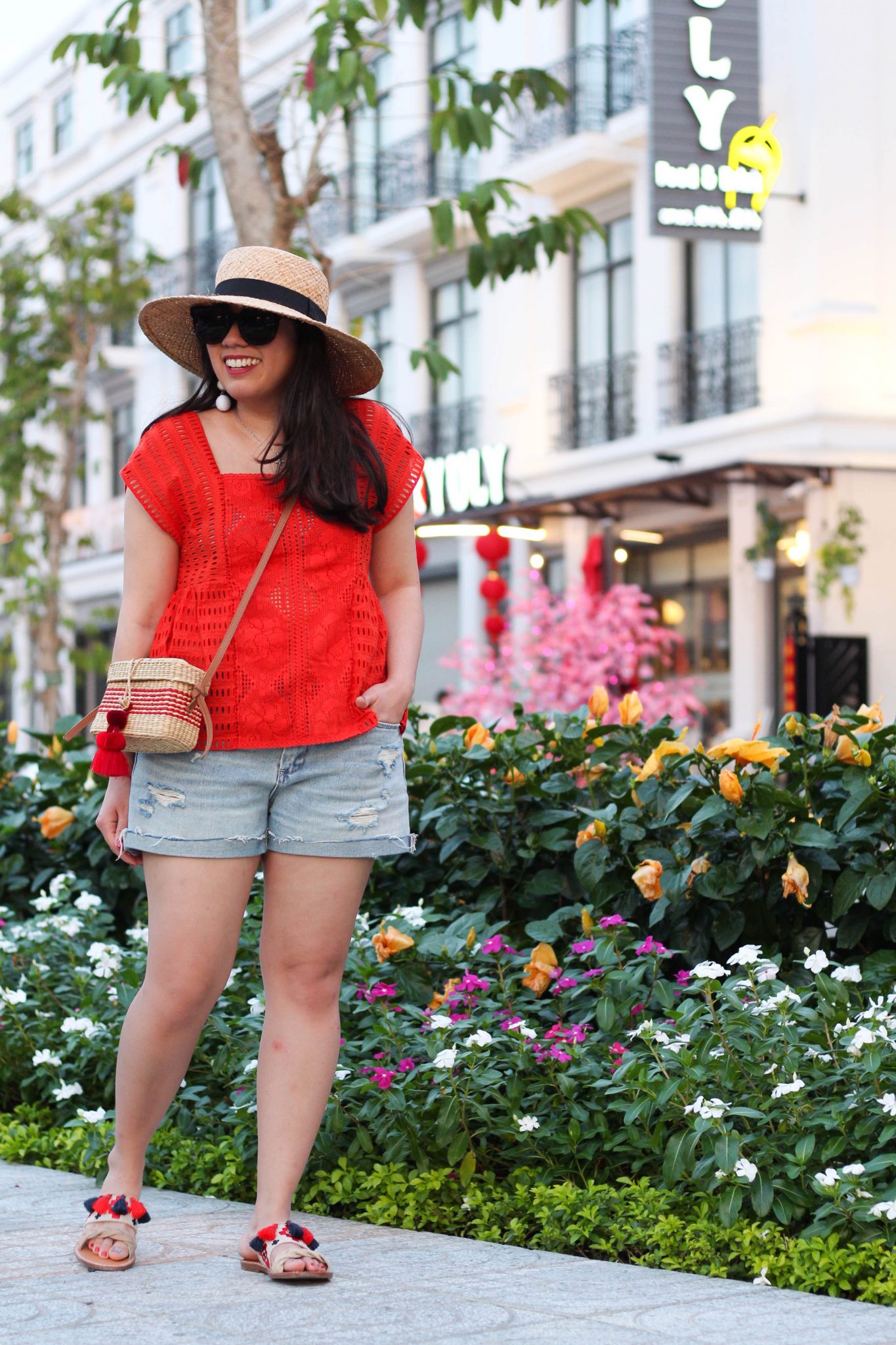 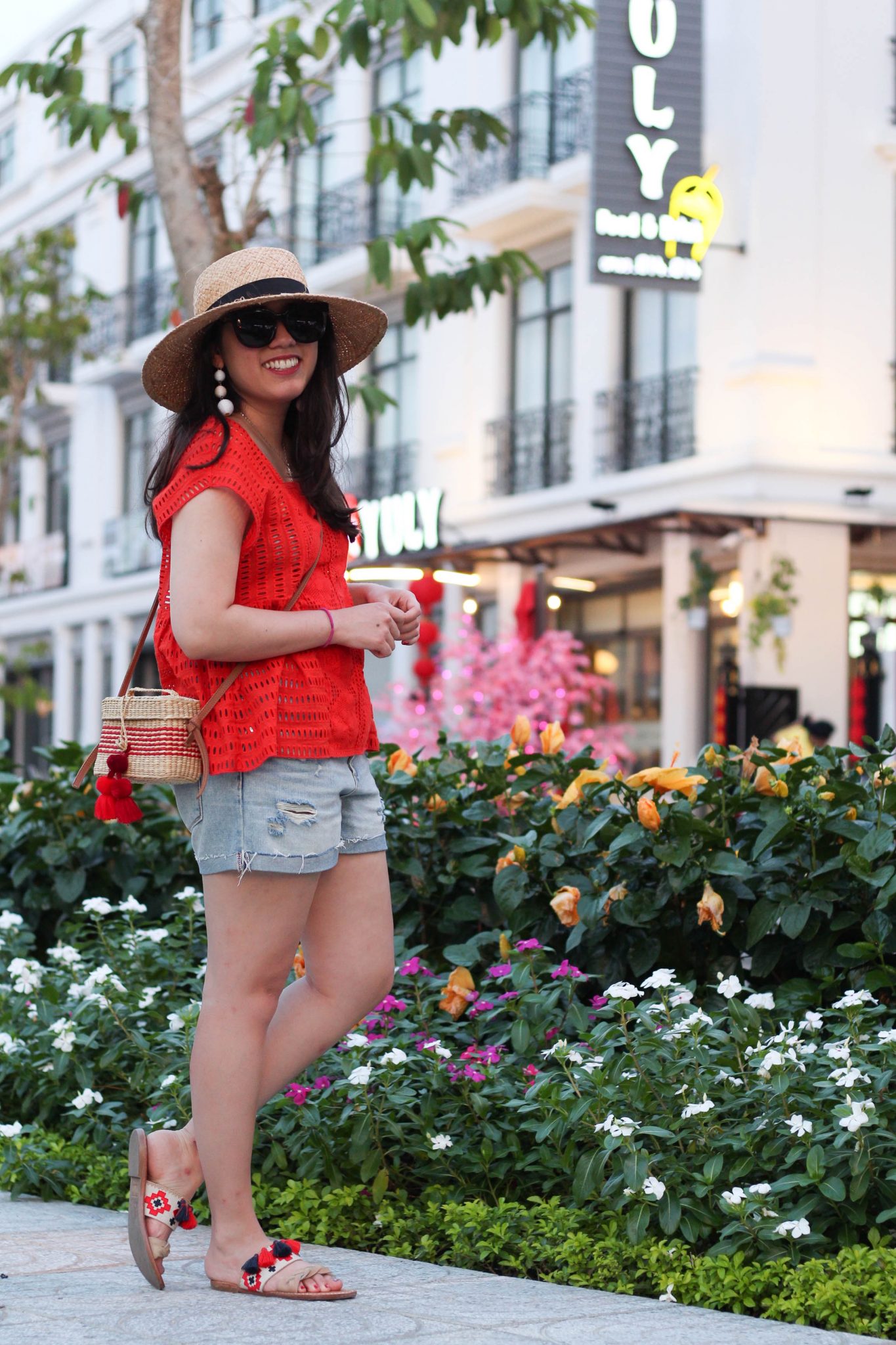 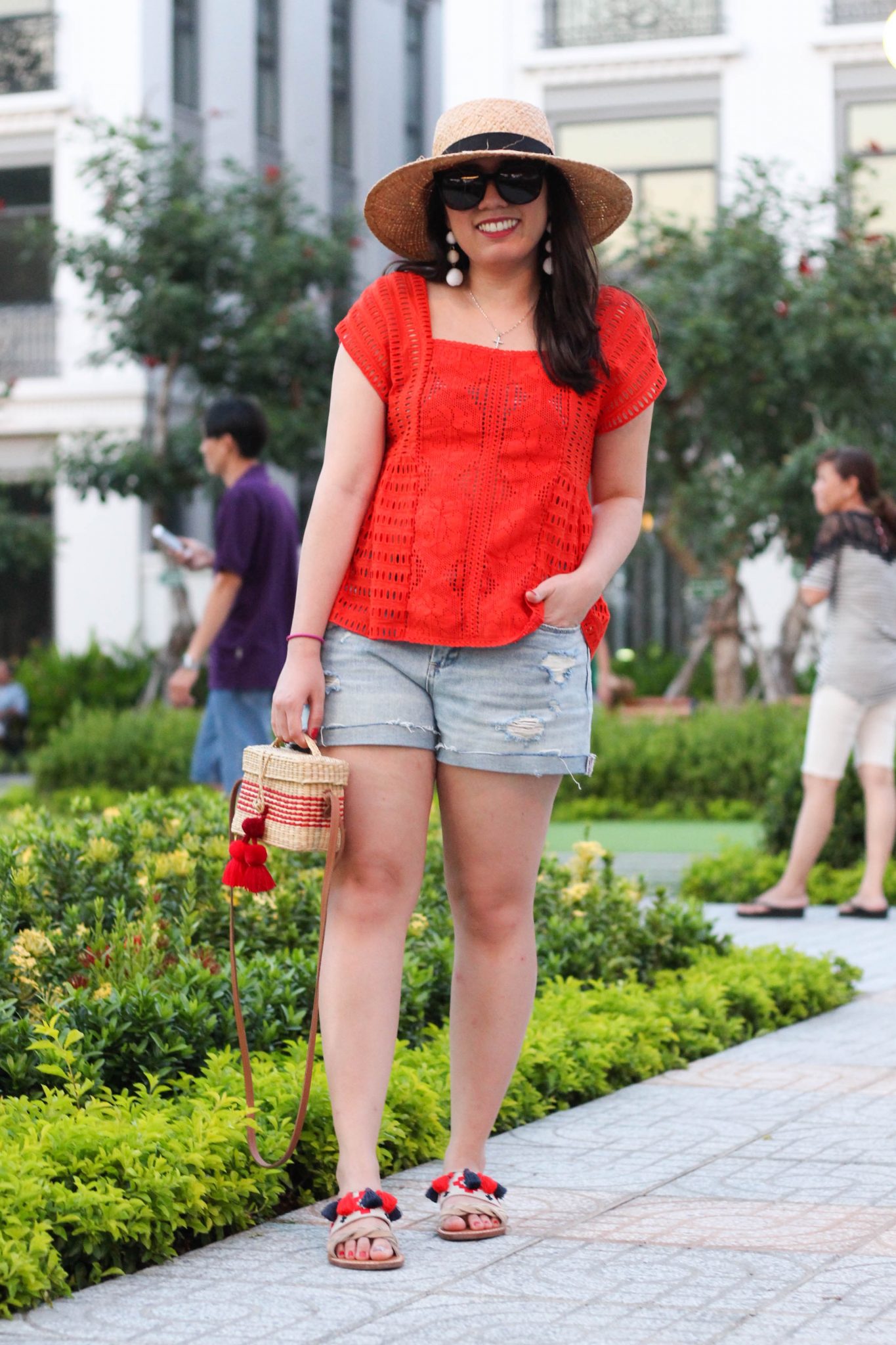 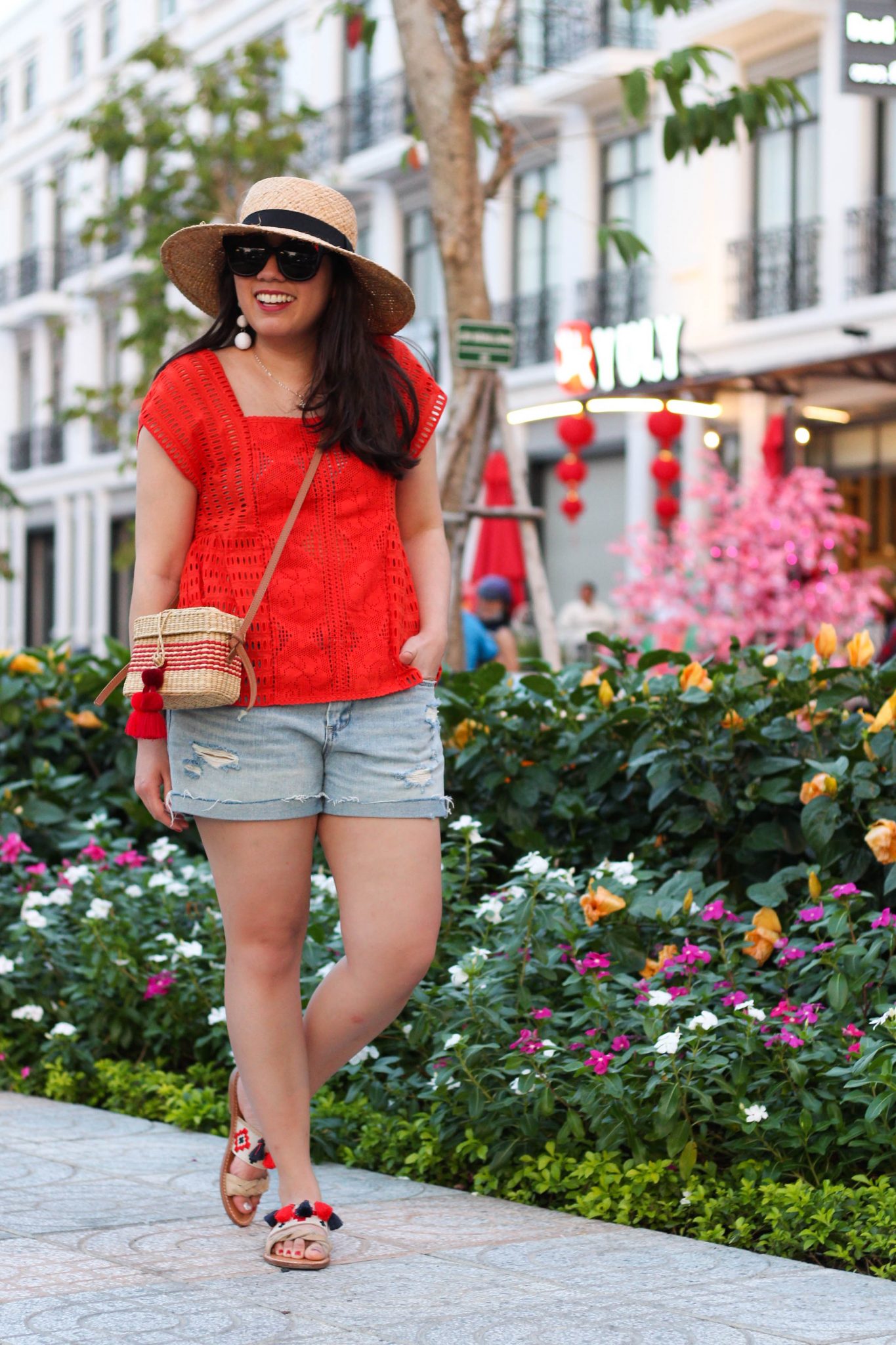 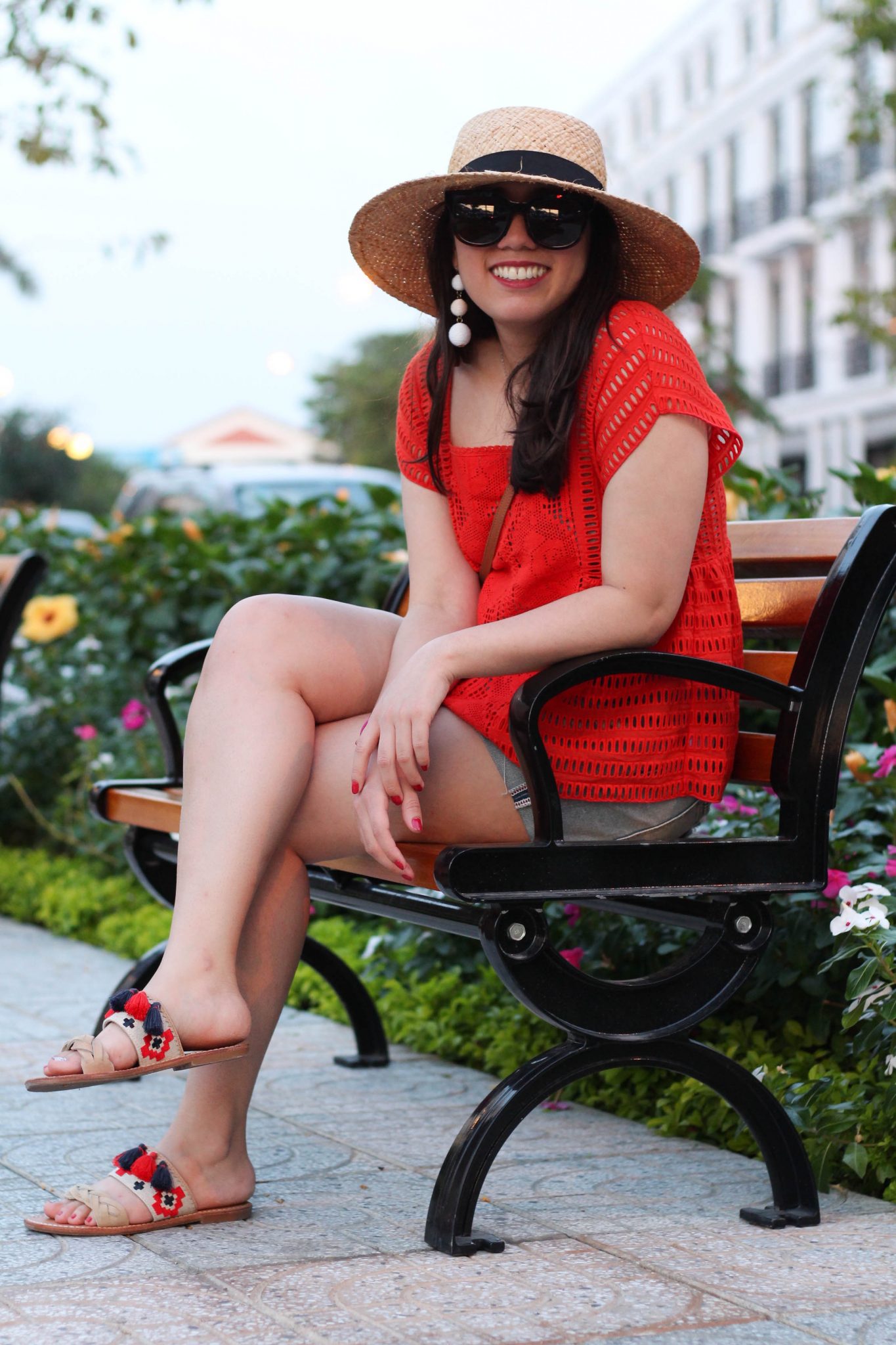 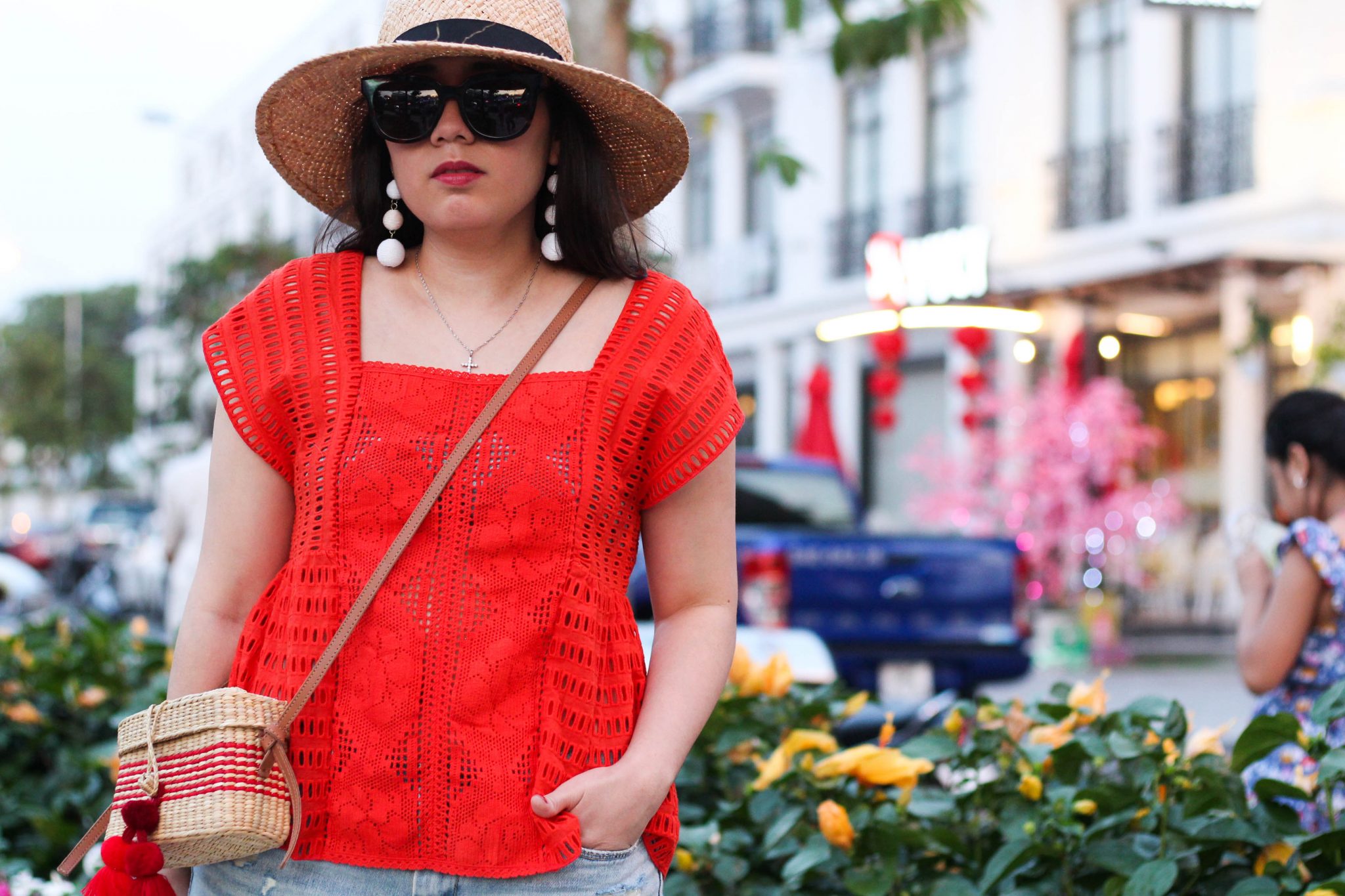 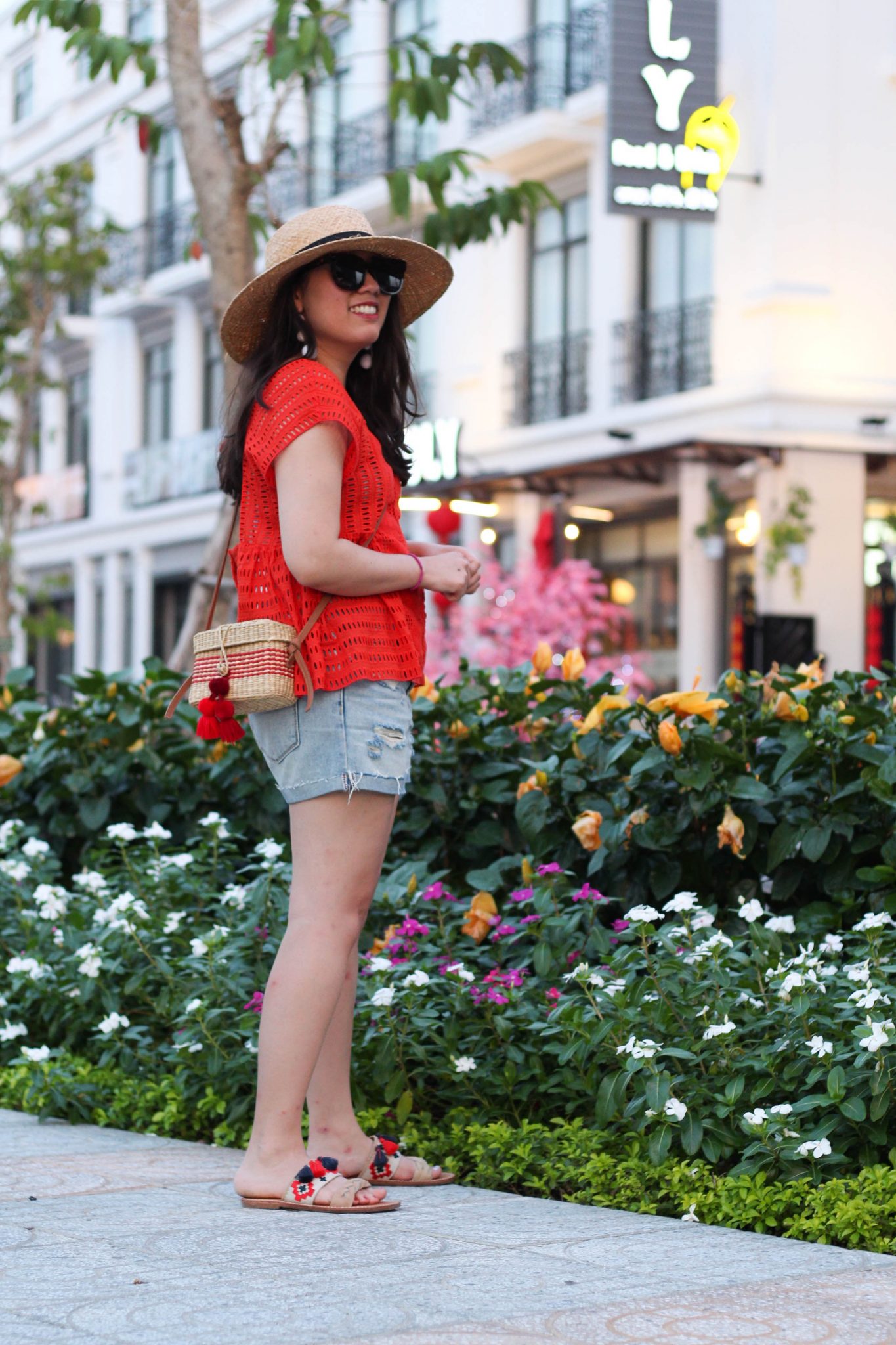 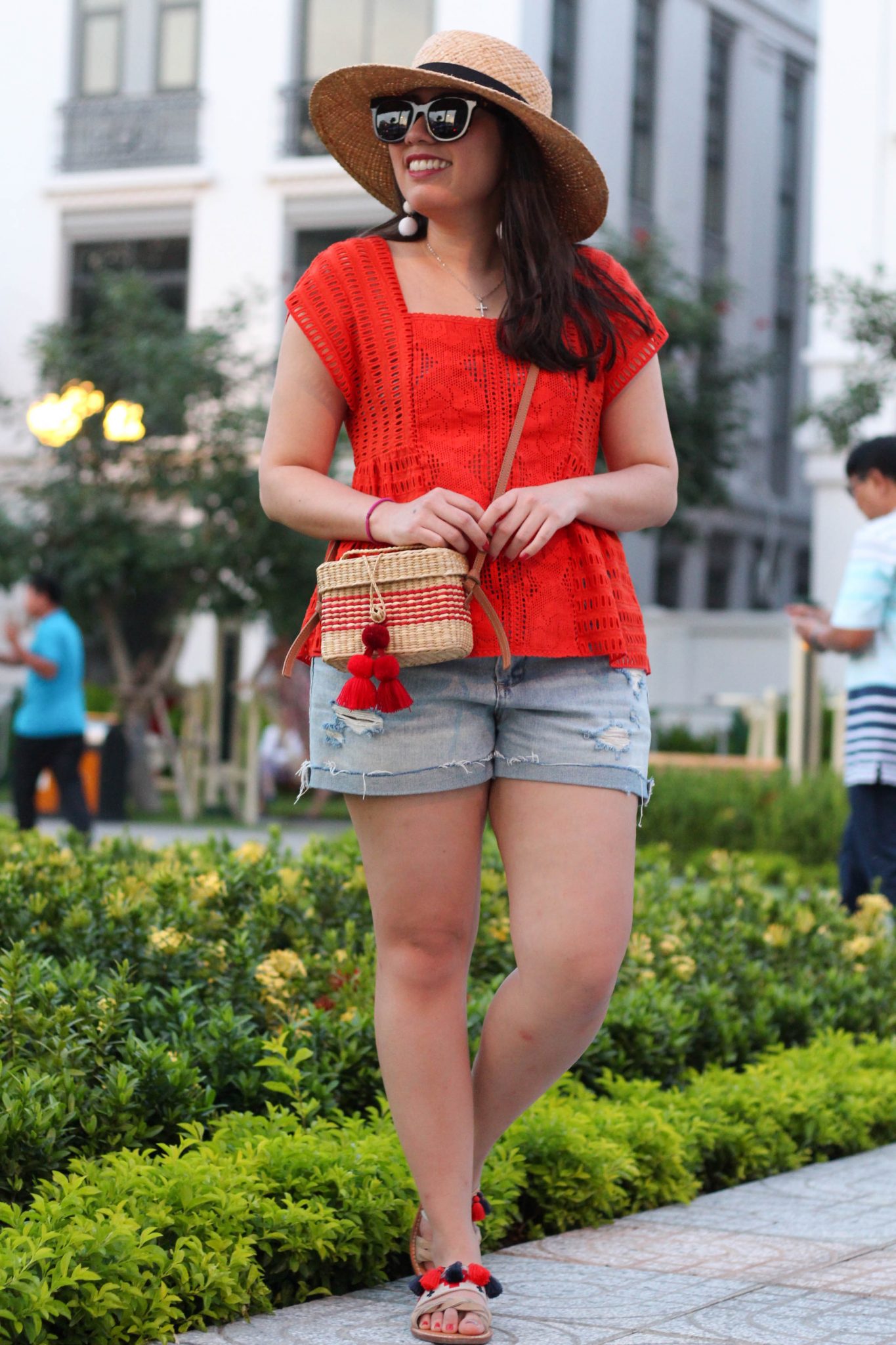 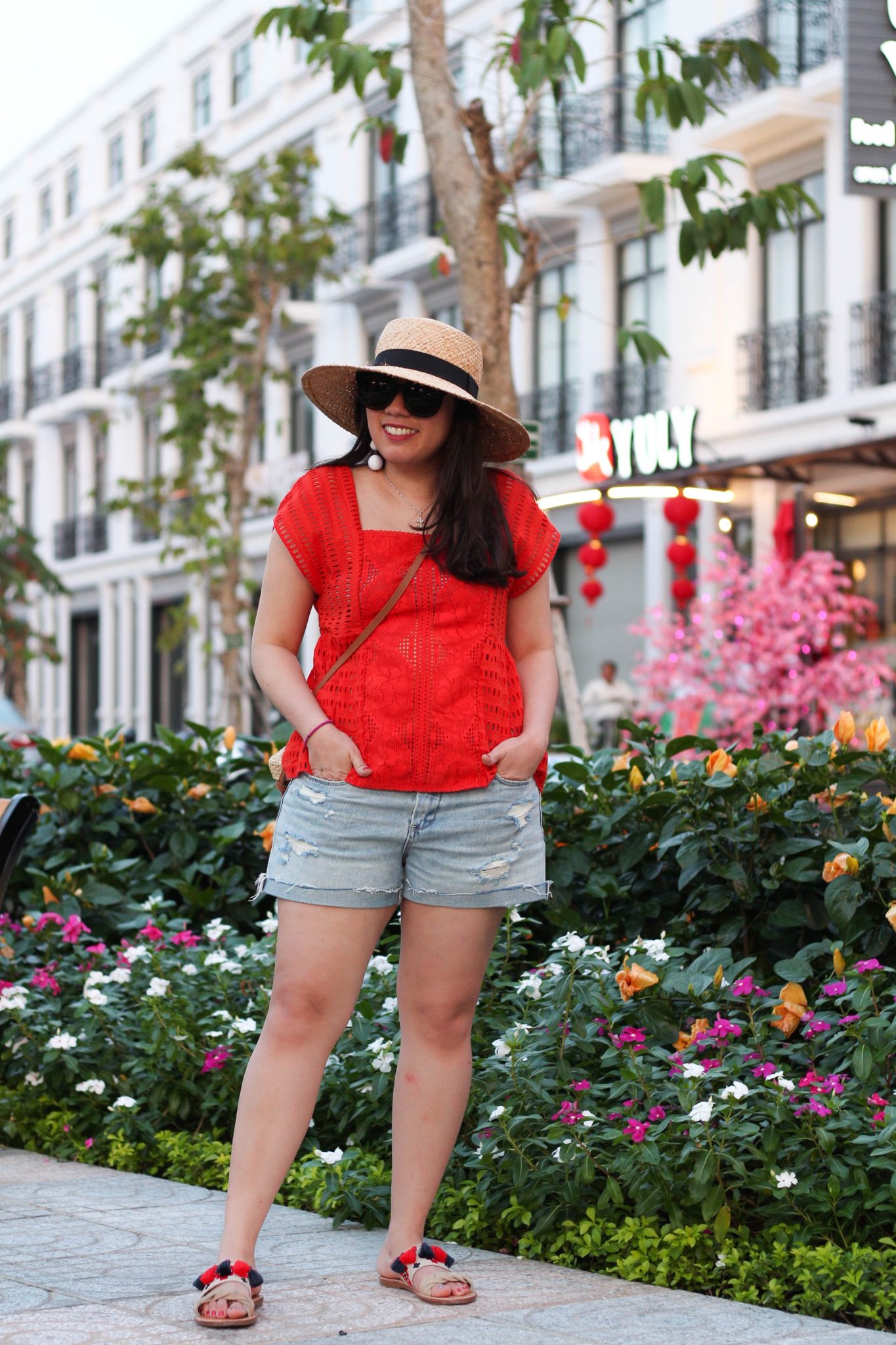 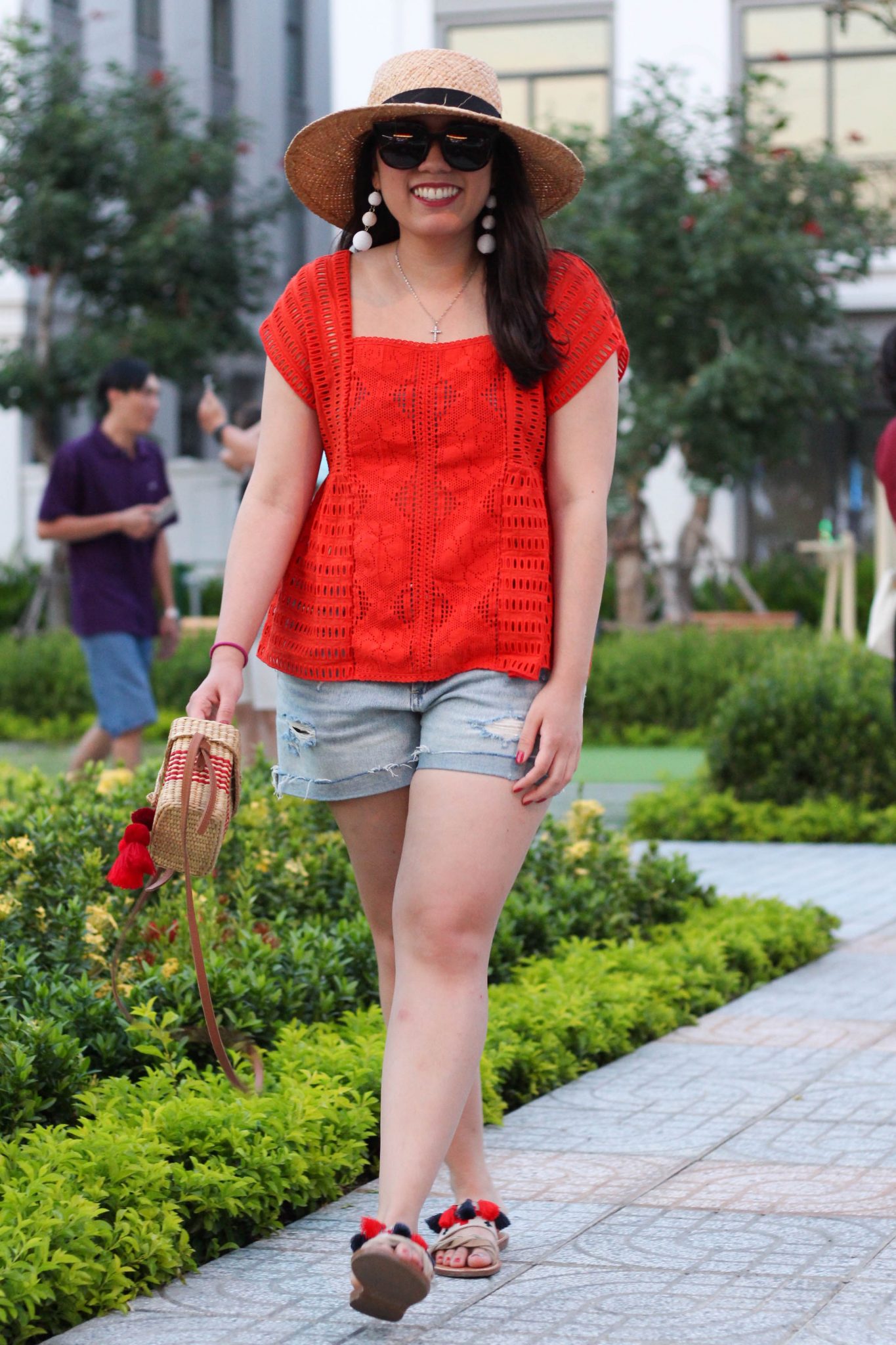 Hello Everyone! Today’s post features two of my current favorite things, the color red and podcasts. Ever since the Lunar New Year, I’ve been sporting and talking more about my love for the color red. Not to hype myself up, but I feel like it’s a color that looks good on my skin tone. Plus I feel as if they don’t make that many things in red so when I see a great piece, I scoop it up. I’ve also been talking about my love of podcasts and I’m finally excited to share some of my favorites today!

This was a major splurge item for me when I was packing for my trip. I waited for this top to go on sale because I was obsessed with it. It has an eyelet detail all throughout and the prettiest bow back detail. And when it did go on sale, I waited again because I thought the price was insane, but since it never went lower, but it was selling out, I finally just went for it. For me, it was a major splurge. I’m talking, over $100 for a freaking top. I know. I’m crazy, but I was in love. I mentioned many times before, but Vietnam was hot hot hot. So the eyelet detail on the top was perfect because it added ventilation and was nice and breezy.

I’m also so in love with these denim shorts. The material is super soft and pretty light which made them super comfy. I sized up cause I really wanted the boyfriend look. And then I finished everything off with my favorite warm weather accessories, especially these earrings. They’re so good! I seriously need every single color and they keep releasing more colors which makes me super excited. If you are on the fence about them, I highly recommend!

MY FAVORITE PODCASTS YOU SHOULD LISTEN TO

On to my favorite topic of the day, podcasts! I’m super picky when it comes to my favorite podcasts. I download a bunch because I’m always on the hunt for a new one, but I honestly know within the first 30 seconds if I like one or not. I might judge to quickly for some, but for me it works. So I’ve rounded up my favorite podcasts and my thoughts about each of them, plus I tried to break it down by category for easy navigating!

For a Good Laugh:

The first podcast I ever listened to! Ok, first things first, don’t be scared by the title! I was skeptical at first, but a coworker mentioned it to me and insisted I give it a listen and the rest is history. It’s by a group of three friends (2 guys, 1 gal) who are British (hello accents!) and they are hysterical together. One of the friends father’s wrote an erotic novel and it is so bad and ridiculous that it’s funny. Each podcast, they read a chapter of the novel and critique it as they go. It seriously is the funniest thing I’ve ever listened to and this is probably my favorite podcast. It’s a quick and easy listen as each episode is probably 30 minutes long. So far, there are 2 seasons out and the third is coming sometime this spring!

Jackie is the best friend you need in your life. I seriously get so excited every time I see a new podcast up. She talks about everything from pop culture, her life, The Bachelor and Bravo. She also brings guests on the show, a lot of them from Bravo shows as well as Morgan Stewart from RKOBH which was one of my faves. But, I actually love the podcasts where she is by herself at home just ranting and running wild. She tells it like it is and she’s so ridiculous that she’s amazing.

Am I the only person that watched The People’s Couch on Bravo?! It was one of my favorite shows, but I feel like no one else knows about it. Anyways, on the show there were two best friends who were always surrounded by chihuahuas so I instantly loved them and when I found out they had a podcast, I couldn’t have been happier. This one definitely falls on the liberal side and they’re not the biggest fans of Trump so if your political views are different, I would say skip this one. But, I actually find this one educational and hysterical. Each week, the girls talk about what’s going on in the government and explain it in easy terms and give their opinion on it. They don’t claim to be educated on all the issues and while the topics are serious they do a great job of stressing the importance, but also making it light hearted and funny.

I have to be honest, this one is a long one. At first, I was a bit turned off by it, but after one listen I was hooked. It is led by Ross Mathews, but cohosted by 4 of his friends as well. It really feels like a family and you feel as if you are part of the discussion. I believe this one is streamed live on their website and there is a chat room, but I typically listen to it after it’s been released. The group discusses pop culture, their life and have different segments that include taking calls from followers of the podcasts. I will say, be warned to headphone users. They’re all constantly talking over one another and laughing loud which can sometimes be super loud and harsh when listening to the podcast. I’ve gotten used to it, but try to listen to it out loud if possible!

Duration: at least one hour, could go up to two

If you’re an Anna Faris fan, you will love this. She always has a celebrity guest on with her and she interviews them and they act out skits at times, which sounds corny, but it’s pretty funny. I’ll be honest, I don’t always listen to every podcast since I’m not always interested in who the guest is. But there are a ton that I do love since she always has a guest so you’re bound to find at least one you like!

Duration: about an hour and 15 minutes

A new favorite! This one is a super easy listen and they’re getting ready to release their season 3. I believe this is recorded live in New York. They are two friends that host it and they are hilarious. I’ve only heard bonus episodes so far, but I’m hooked. They bring comedians on the shows to do a stand up act as well as interview them before they close it out. I seriously go into each one not knowing what to expect and always end up laughing hysterically after 5 minutes in.

I’m seriously always on YouTube, watching everything and anything. Shane Dawson is one of my favorites. He posts videos every single day so I always binge watch on Friday night to catch up. Anyways, he releases a new podcasts every Monday with his cohost Jessie. Shane has a very dark and dry sense of humor so if you’re easily offended, this one is not for you. They talk about everything from pop culture, YouTube life, Farrah Abraham and Tyra Banks. They also bring on guests that include other YouTube stars, celebrity psychics and a few celebrity guests as well. The one downside is that they super pre-record this. We’re in April and listening to stuff, they recorded in January, which is annoying, but still a great listen.

I’ve been following Tyler on YouTube for years! And I loved both Tyler & Korey on The Amazing Race so I love being able to keep up with them every week. Each podcast is light and short so it’s an easy listen. They’re best friends so they talk about what’s going on with their life as well as pop culture. It’s really funny and honestly Tyler’s laugh alone will get you hooked.

While I have no plans to quit my day job, this podcasts is super inspirational and also provides great insight and tips for bloggers and pretty much anyone who doesn’t work a typical 9-5 job. The host basically started it because she was passionate about becoming a singer/song writer and now that she’s living her dream, she wants to inspire others to live theirs. She interviews anyone from bloggers to designers about how they became successful, advice they have and any struggles they’ve gone though. Again, not trying to quit my day job, but I do love hearing success stories!

Duration: about an hour

So Money with Farnoosh Torabi

So random, but I actually love this one! This podcasts talks about everything money related even topics that you’re probably not even thinking about yet. The host interviews business leaders and entrepreneurs about being smart with money, how they manage it, how they view it and what they learned from it. She also has solo episodes where she dishes out great advice. One of my recent favorite episodes is with the former EIC of Seventeen, Ann Shoket who talks about her new book. She talks about the work/life balance, what it’s like to be a young person in the work place and gives other really great advice. Although the title seems like it would be boring, it’s actually really insightful.

Duration: 30 minutes to an hour

To be honest, I have a love hate relationship with this one. I don’t listen to many fashion podcasts, because I find them to be super preachy and super “this is how to be cool”, but I do like this one. The two hosts share news about what’s currently going on in the fashion industry, such as any scandals or updates. They also answer a reader question and give advice towards the end. As mentioned, I have a love hate relationship with this one because I love the information, but I don’t always agree with everything the hosts are saying. I also find them to be a little corny and cheesy so it’s kind of cringey to listen to them at certain points. But, I do really like the information so we’ll see.

Another new favorite of mine. It’s about two long distance best friends who hop on the podcast to discuss what’s going on in their life as well as whats going on in the world (again this one leans towards a liberal point of view). This one is interesting because the friends are super calm, yet funny and they seem to balance each other out. I feel super relaxed when listening to this one and like I’m just hanging out with friends.

I first heard about this one, because one of the hosts is Lo Bosworth who was on Laguna Beach. Lo hosts the show with two friends and they all have a great dynamic. They all talk about everything and anything, from life to pop culture to fashion to just sharing random thoughts. They also bring on guests as well, which to be honest I’ve skipped over a few since I’m not interested in the guest. But, this is another one where you feel like you’re just hanging with the gals.

Duration: about an hour

WOOOOF!! That was a long one! But I hope you guys enjoyed finding out about my favorite podcasts, I love podcasts and they help me work throughout the day so I got a little passionate while writing this. But, if you’ve listened to any of these or have any suggestions, I would love to hear!