New York City got a little taste of spring weather this weekend and it was wonderful. I’m already over this winter weather and have moved on in my head so to actually not be freezing when I step outside was great. 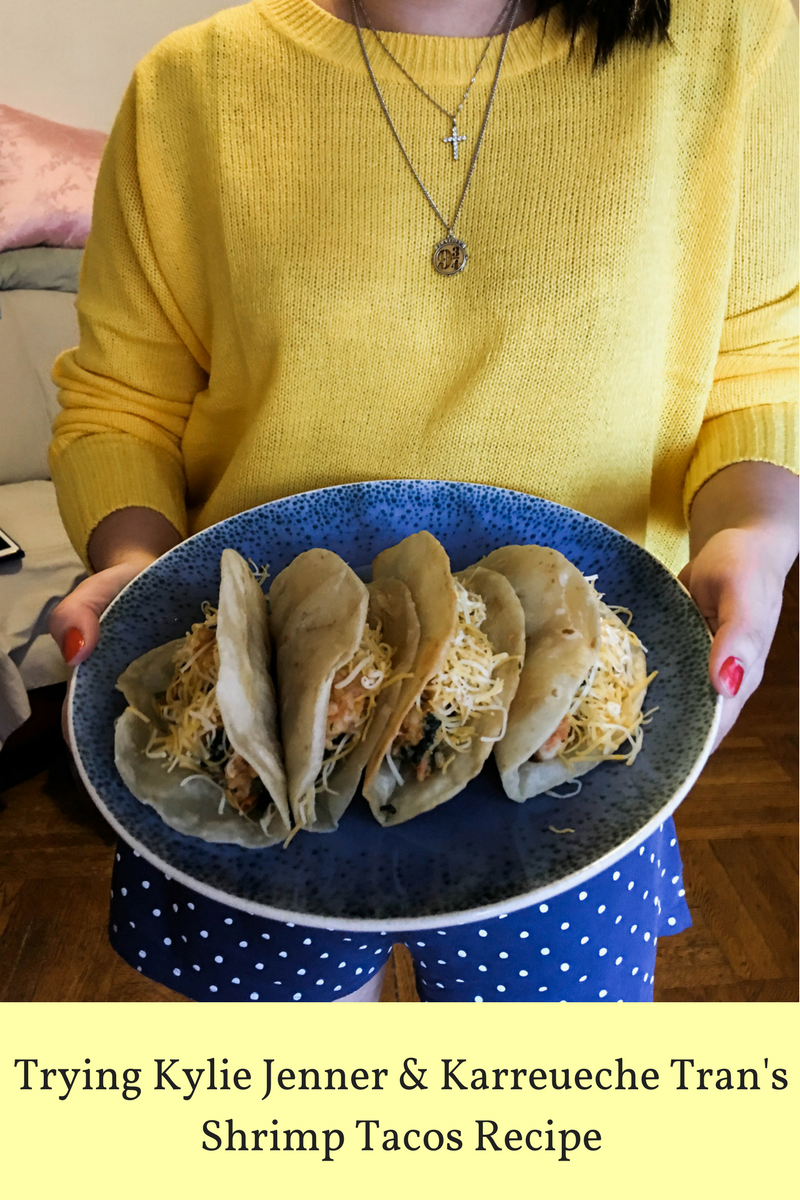 So before, we get into today’s shrimp tacos recipe post, I wanted to give you a little background info and a little disclaimer.

Back in October, I was home sick with a stomach bug for pretty much a whole week. I’ll spare you the details, but it was not pretty. Anyways, I was bored and started browsing what they had on On demand. Turns out the entire season one of The Life of Kylie was available.

Now, I’m not a big Kardashian fan, but I’m also not a big hater either. Consider me Switzerland when it comes to them because I’m neutral. I had heard good things about the show and decided to give it a try. I’m gonna be honest, I actually enjoyed it and got through the whole season pretty quickly.There was one episode in particular, where Kylie mentioned she made this shrimp tacos recipe every day and how she was obsessed with them after Karreuche Tran showed her how to make them.

Well, I love shrimp. So much so, that one year for my birthday, my coworkers threw me a party with platters of shrimp cocktail. I’ve actually never had shrimp tacos and hers looked so good I knew I wanted to give it a try.

Hi, my name is Linda. I’m 25 from New York. I have a full time job so I guess you can call me an adult. And my idea of cooking is heating up a frozen meal or making a box of character shaped Kraft mac and cheese.

So with that being said, I’ve been wanting to try my hand at learning how to cook and make actual meals. And I wanted to share my experience here on the blog so if you’re like me and you just know how to boil water, hopefully I’ll inspire you to try it out as well. Or if you’re a real adult and know how to cook, well you can just laugh at me then.

I’m not a food blogger, hence no beautiful pictures of my food. I personally think my tacos look great in the picture, but it’s okay if you don’t. But, again I just wanted to share my experience and today I’m sharing my attempt at making Kylie Jenner & Karrreueche Tran’s shrimp tacos recipe.

WHAT YOU WILL NEED FOR YOUR SHRIMP TACOS 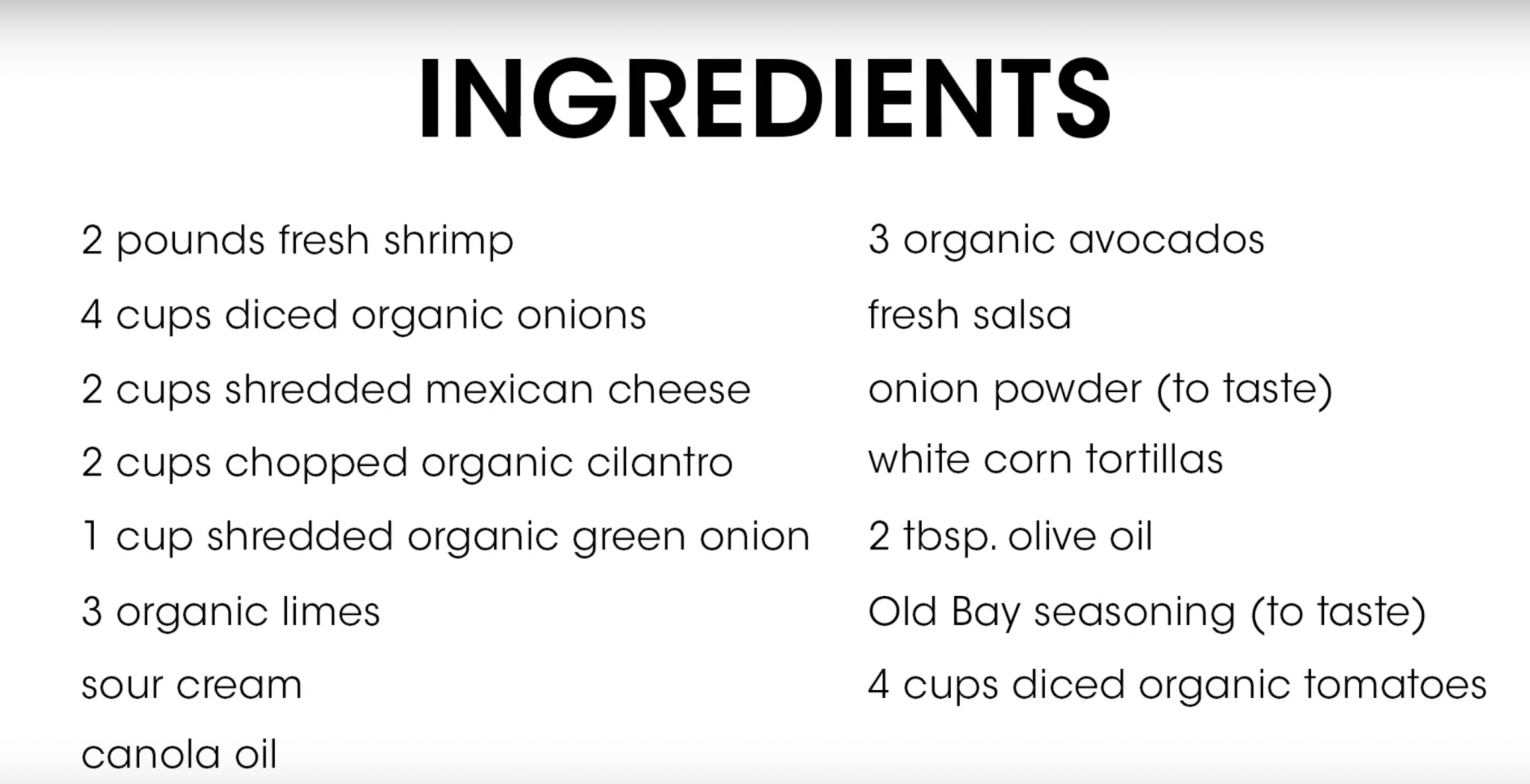 In the video, Kylie & Karreueche not only made shrimp tacos, but also guacamole. As this was my first time really making a home made meal, I decided to take baby steps and just make the tacos.

So, from this list, I did not use green onion, limes, sour cream, avocados and fresh salsa.

I also eye balled a lot of the ingredients. I used 1 pound of shrimp rather than two, 1 whole small tomato, a quarter of an onion and a small bundle of cilantro.

I also realized I grabbed flour tortillas not corn tortillas. I don’t know if it made a difference, but just wanted to call it out.

We’re just getting started and already I’m not listening to the instructions.

Personally, I’m a visual person so I just followed along with their video. You can see it here. I thought it was pretty easy to follow along and helpful. But, if you find it easier to read the directions, BET.com broke it down.

HOW LONG DID THIS SHRIMP TACOS RECIPE TAKE?

Between prep, actually cooking everything and even factoring in the clean up, it took me about an hour and a half.

I think if you prep your ingredients the night before, it’ll for sure be less. And I really struggled with frying the tortillas so if you just bought hard shell tacos, that will save you time as well.

Drum roll please… I actually really liked them and enjoyed the process of making them.

With that being said, I definitely made a few mistakes as this was my first time.

I wish I had put more seasoning in the shrimp. I was so nervous that I would put too much since there weren’t specific measurements and I just eye balled it. To be honest, next time I would probably add some adobo to the mix as well since that makes everything better.

I also for sure overcooked the shrimp because I was scared I would undercook them. Shrimp really is super quick to cook and you just have to wait till it turns orange/pink so next time I would listen to the shrimp and turn off the heat earlier.

I really struggled with frying the tortillas. I don’t know if I put too much oil in or maybe I’m just really unexperienced, but I don’t think they really became crispy. They kept getting big air bubbles and I was super scared so I kept pulling them out. Funny enough, my mom passed by as I was cooking these and she said I put too much oil in, I should have listened.

They did have a nice crisp to them, but to be honest, I think if I wanted hard tacos, I would just buy the hard shells next time.

But, overall, I think this shrimp tacos recipe was really great and although I had a few hiccups they were pretty easy to make. I would probably add corn in next time since I like corn and think it would add a nice sweetness. And I don’t typically put sauce in my tacos, but since I overcooked the shrimp, I wish I did have a little sauce.

WOULD I MAKE THIS SHRIMP TACOS RECIPE AGAIN?

Totally! And now that I’ve made it once and learned a thing or two, I’m more confident and inspired to add my own touch to it, like adding corn and adobo. And hopefully not overcook the shrimp again…

I think the recipe is pretty easy to follow. If I can do it, so can you and I mess up everything so that’s saying something.

I hope you guys enjoyed this post. It’s so different for me, but something I wanted to start sharing on the blog.

And on a similar note, I’m obsessed with Chrissy Teigen and actually picked up her cookbook because I love her that much so I’m thinking of trying a few of her recipes and sharing my experience on the blog. Let me know if you would like to see that!

Let me know if you end up making this shrimp tacos recipe and what you thought of it!

Thank you so much for reading and hope you all have a great week!