Happy Monday! Can we talk about how this is the first time ever I’ve posted a full outfit post without sunglasses on?? This is monumental for me guys. Also this is probably one of my favorite looks I’ve worn in a while. I’m super trendy with my hat that I don’t know what to call since everyone calls it something different, but I think its a fisherman’s cap. I’ve seen so many people talk about this trend and how much they have been loving it and I never thought I would give it a try, but here we are and I’m in love. My jeans are new and fit my short legs perfectly so I’m clearly winning at life. My sweater is cozy and I love the tie details on the sleeves that hide my hands. And my booties make me look uber skinny and tall so again I’m clearly winning at life.

But, anyways I get a ton of questions asking for career/fashion advice so I like sharing my thoughts here on the blog. My experience is mainly in the fashion industry which I do talk about, but I also want to share some tips with those of you who are not interested in the fashion industry and just interested in career advice. So today I wanted to share what I’ve learned from working in a corporate environment. Just a few thoughts that I wish I had known when I first started working and a few tips you can apply to any job. 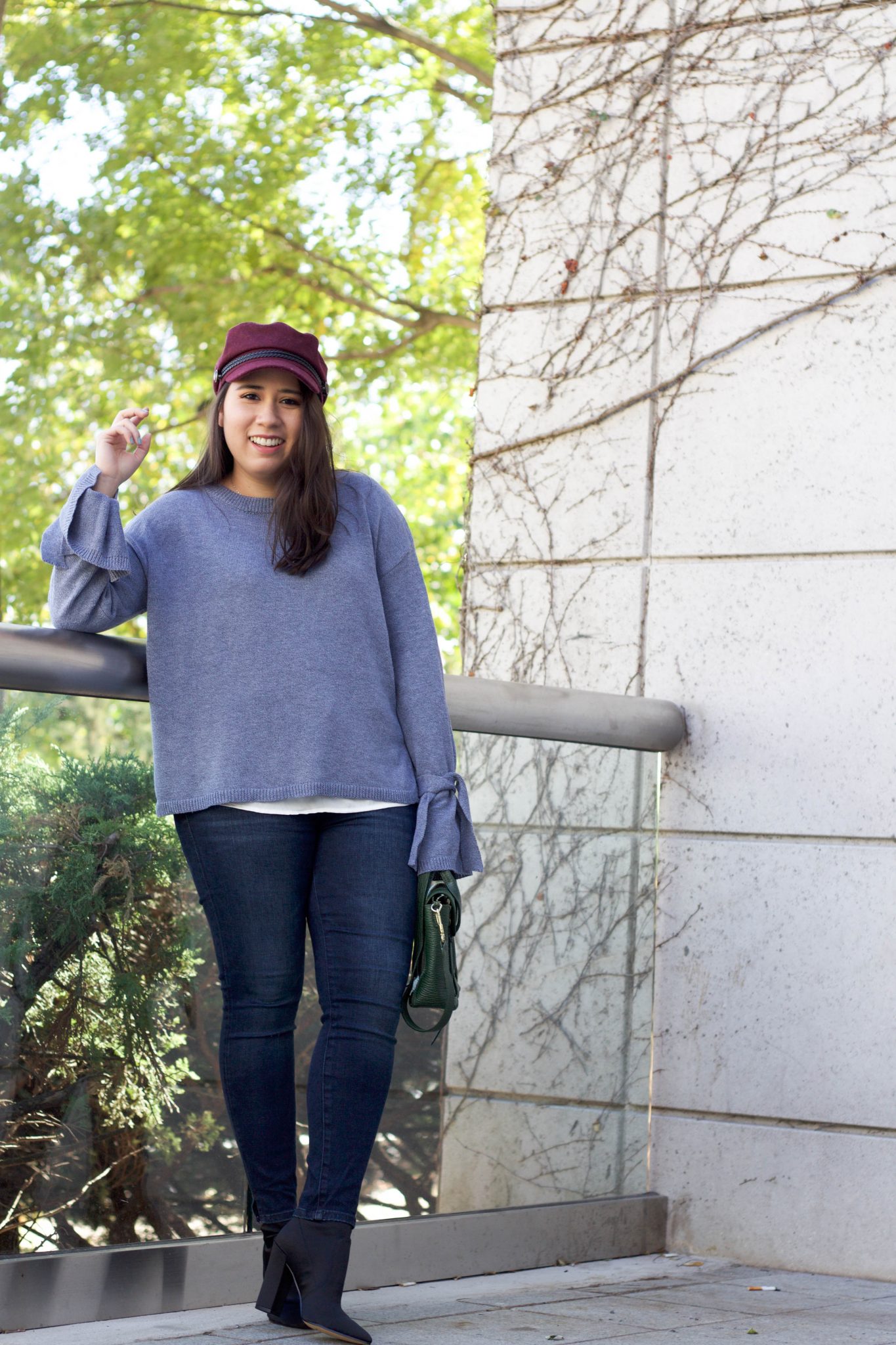 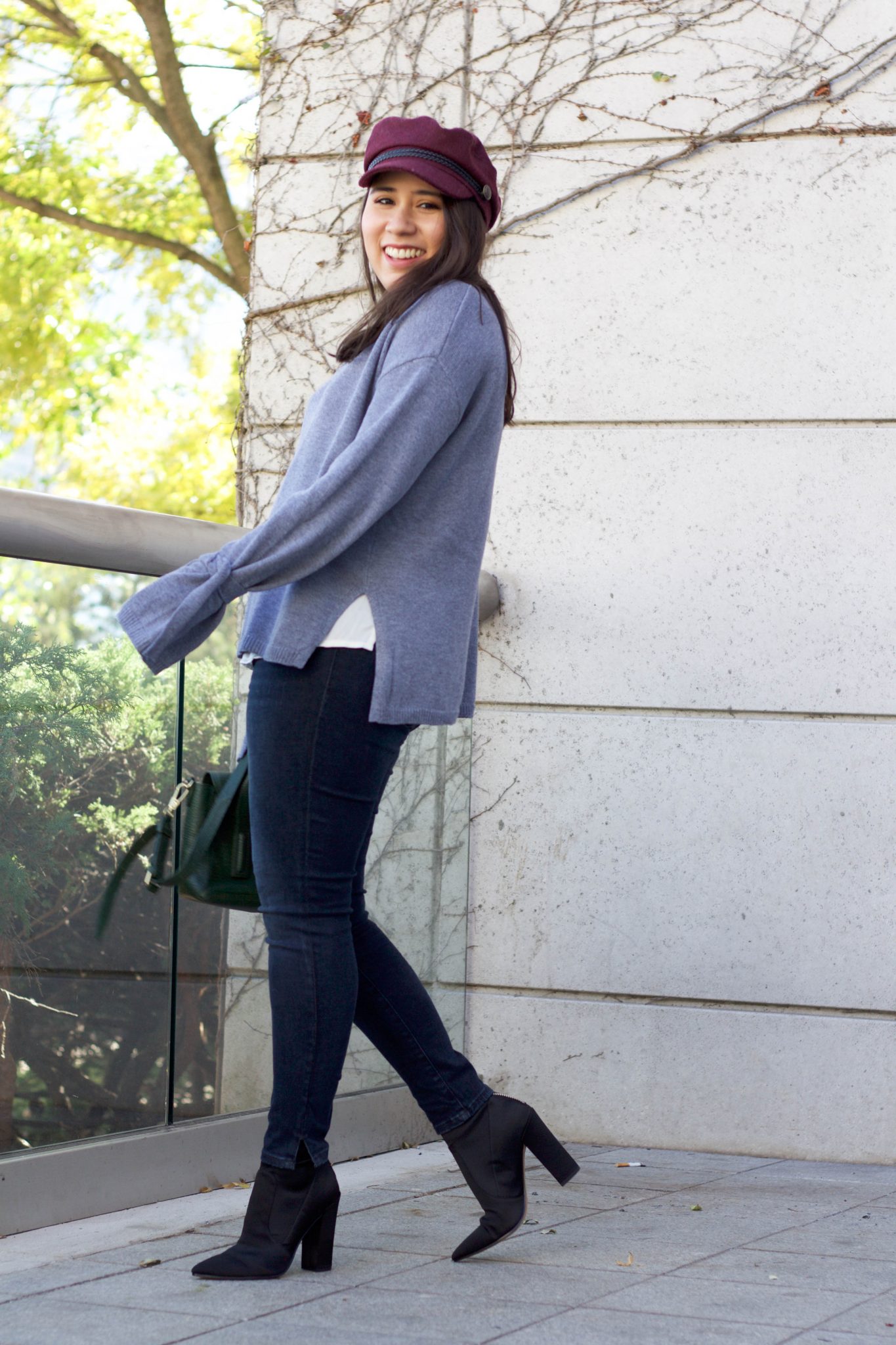 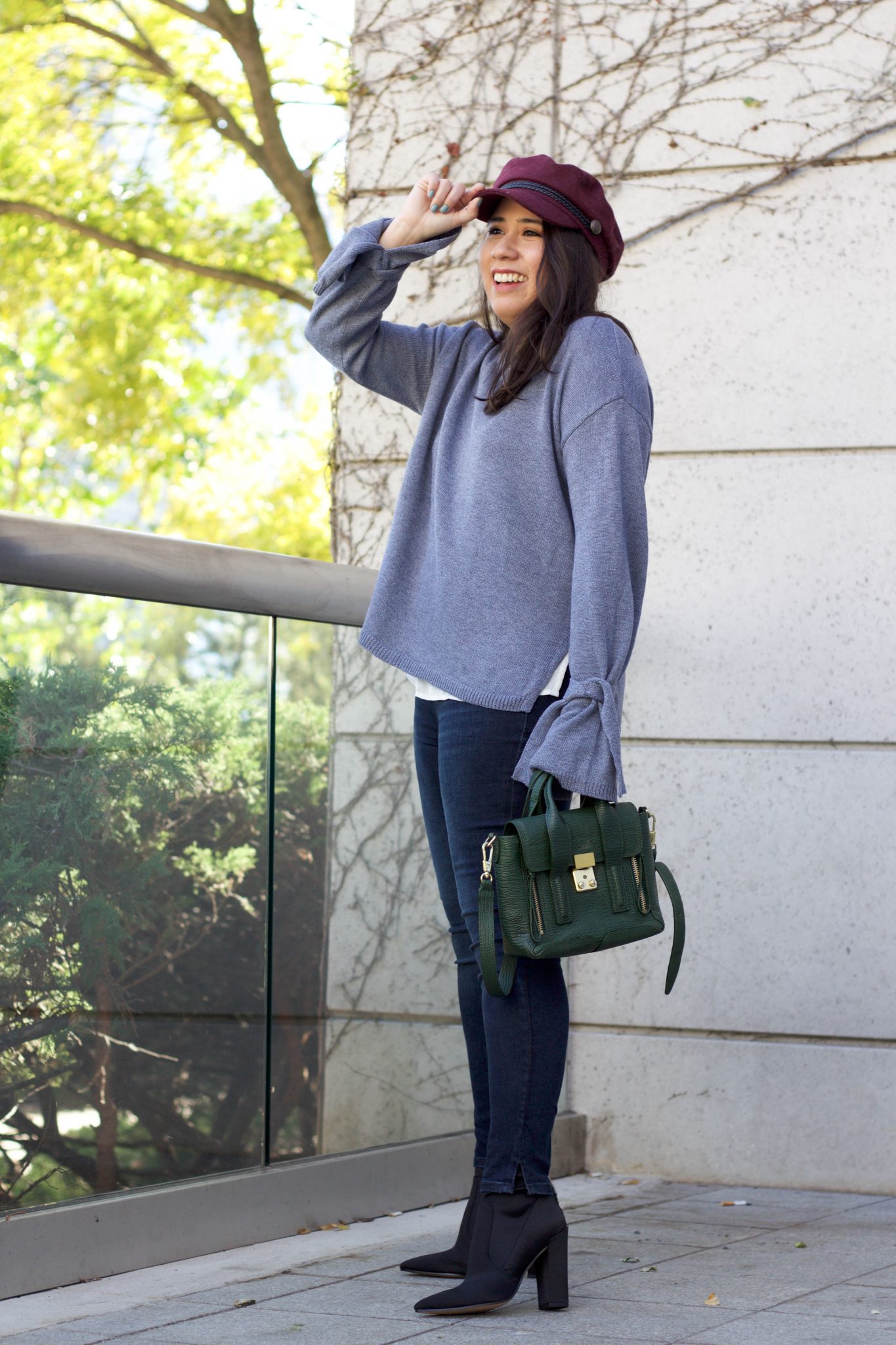 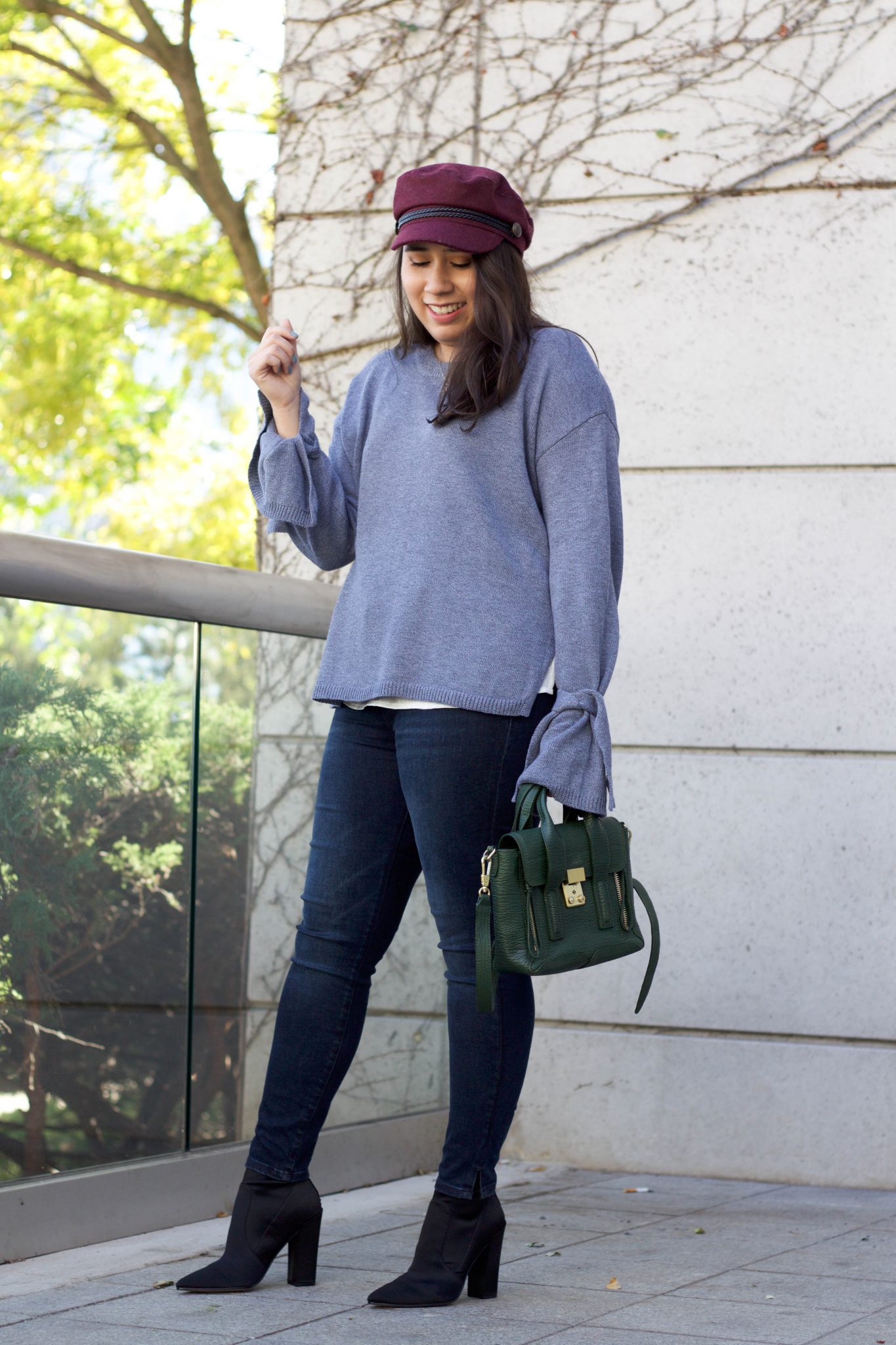 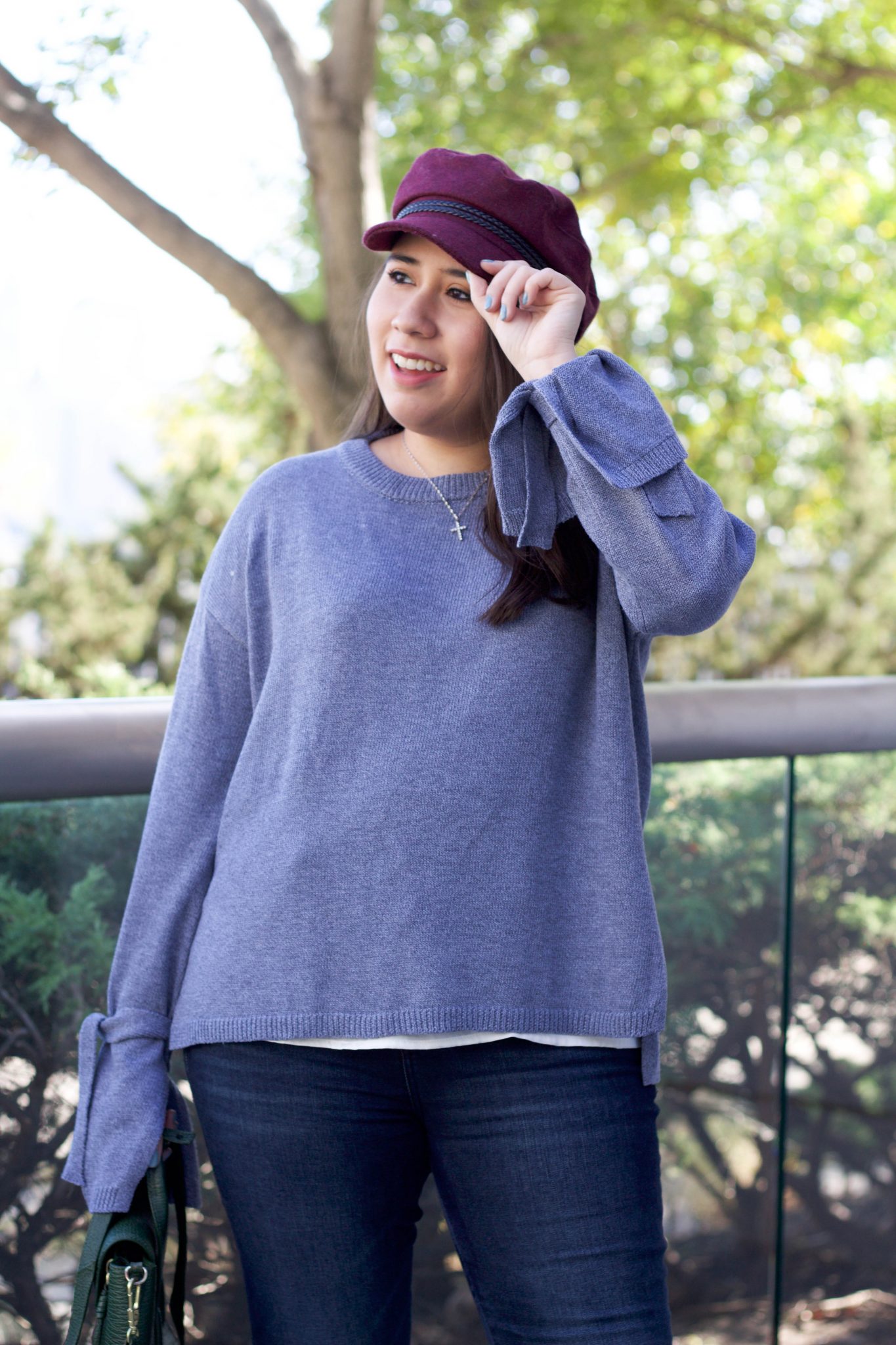 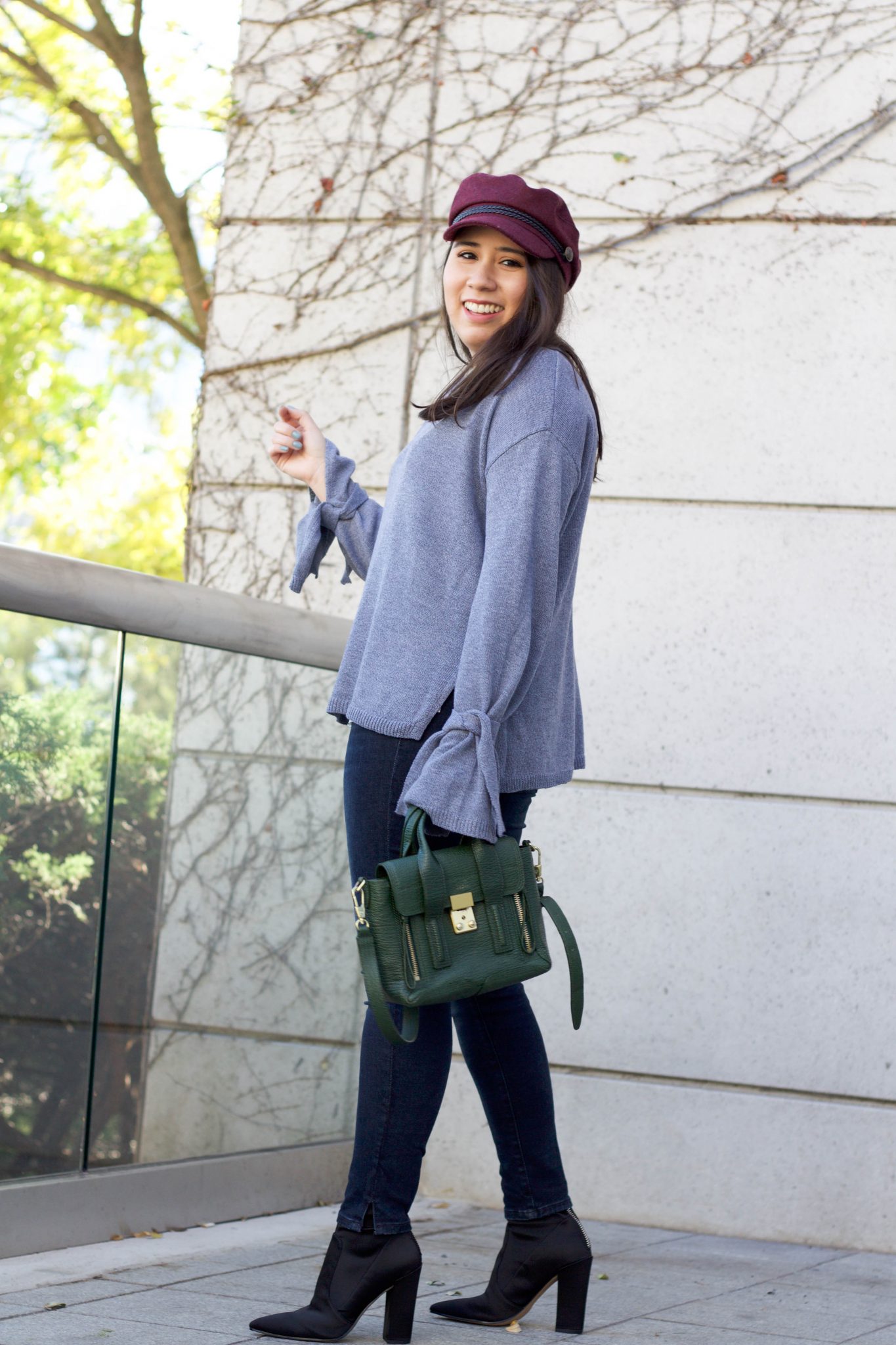 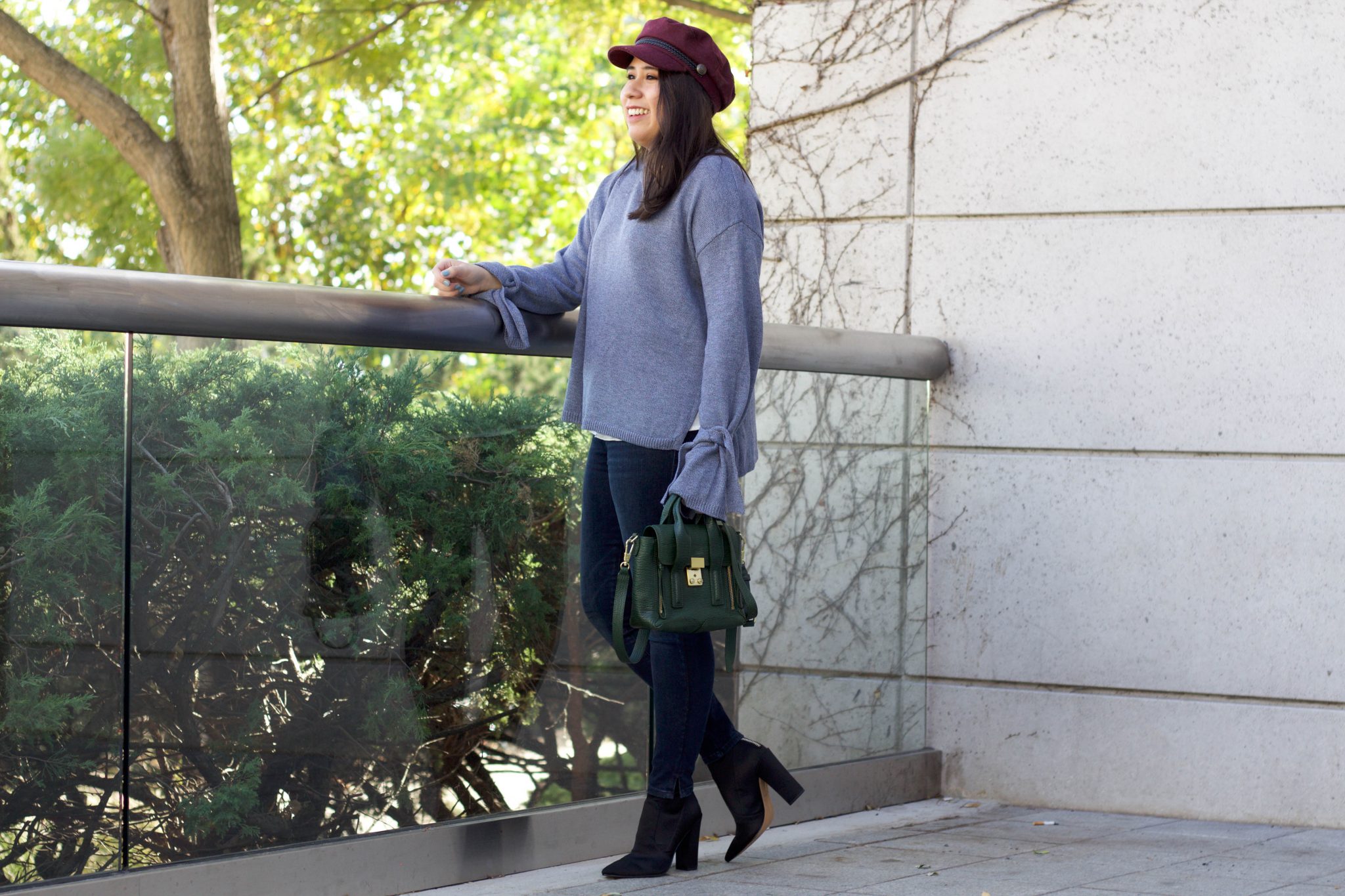 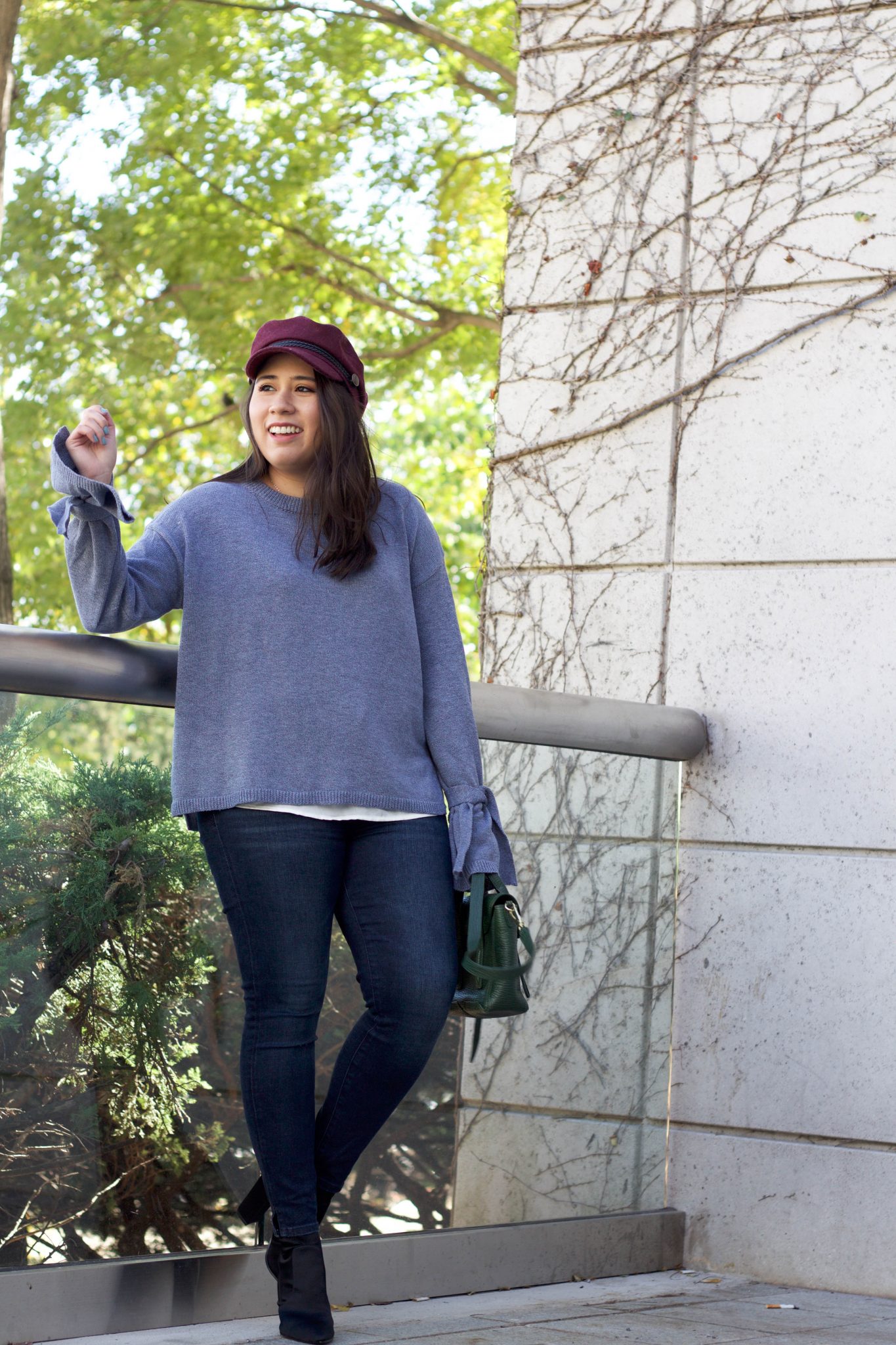 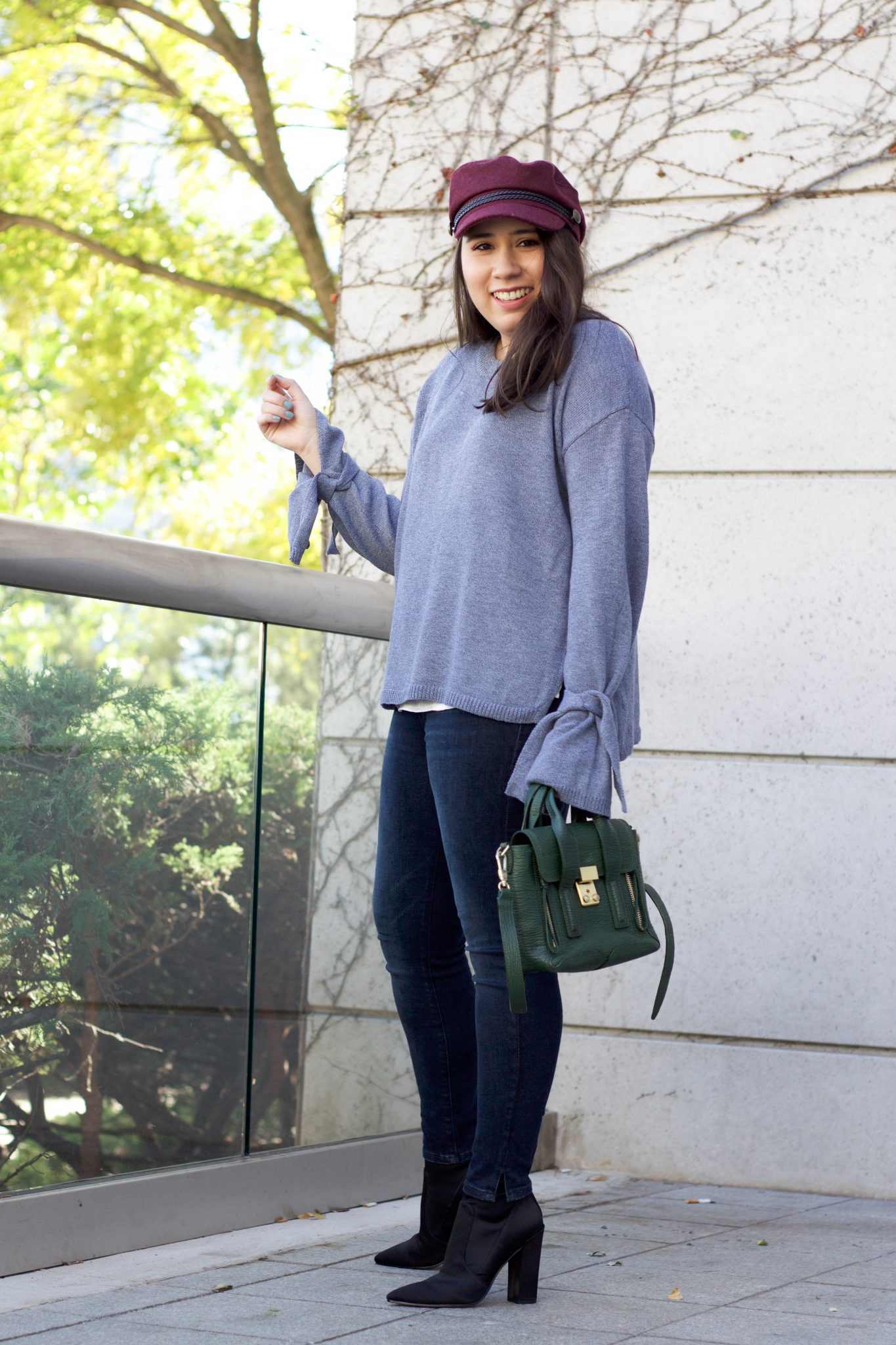 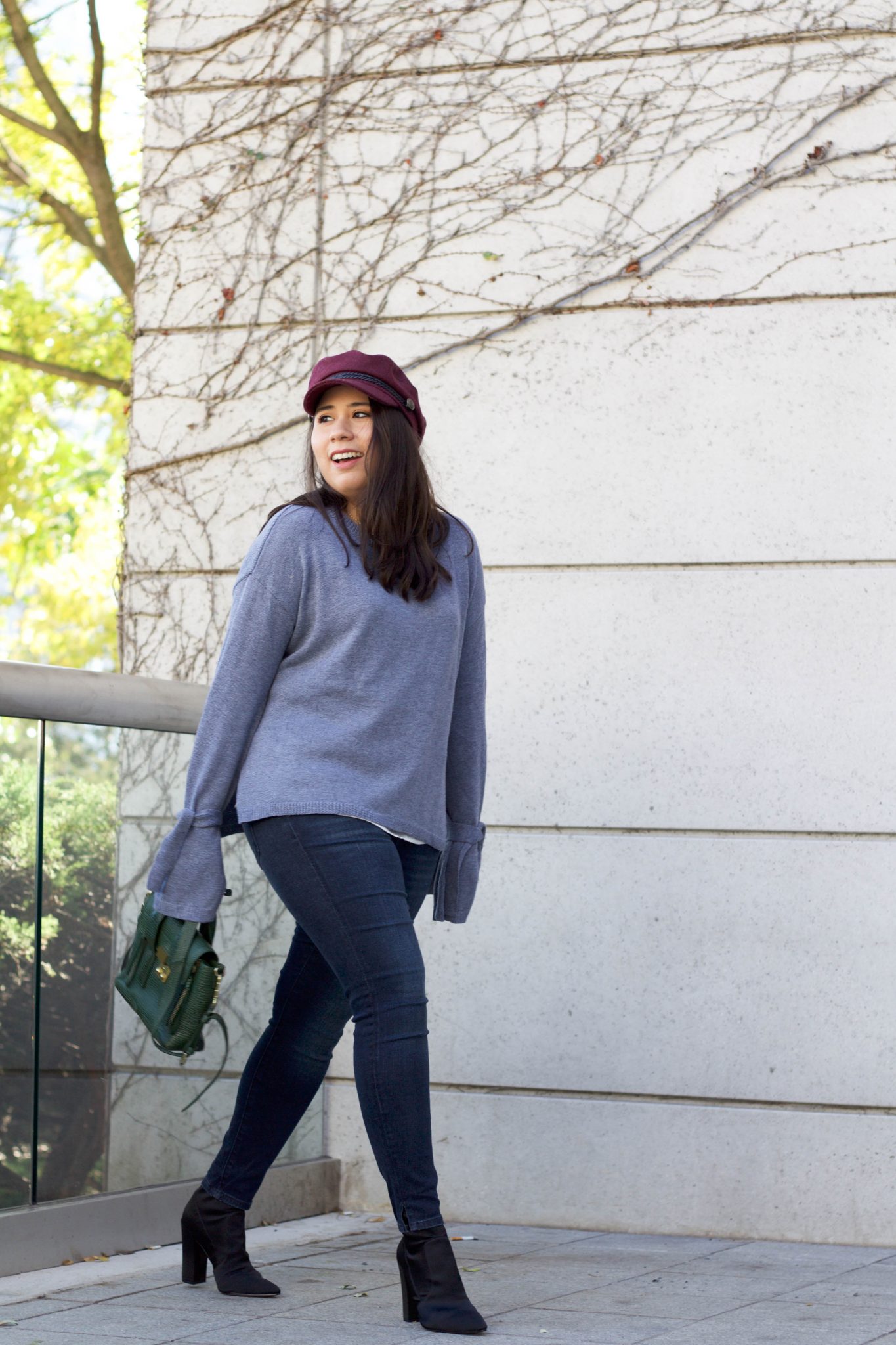 5 Lessons I’ve Learnt from Working in a Corporate Environment

Try Not To Take Things Personally

I take everything personally. I act all tough, but in reality I’m actually really sensitive and have lots of feelings! You guys know I come from an editorial background and let me tell you, the magazine industry is like no other. It’s honestly an HR nightmare and like nothing you’ve ever experienced. Everything is personal. I remember one time I had dinner plans with my best friend which my boss knew about and threw everything my way by the end of the day to make sure I couldn’t leave. So when I started working at the Victoria’s Secret corporate office, I had a lot to learn.

First, I had to take my guard down and take the armor off. The reality is, you will have disagreements and different opinions with the people you work with. For example, my team has a meeting every Monday morning where we review the week ahead and plot out the schedule. There have been so many times where someone has asked me to move up my schedule or they just don’t understand why a task takes long and vice versa. I used to leave these meetings feeling like I was being personally attacked and being frustrated. But, over time I’ve realized that it’s not personal and the worst thing I could do is to get upset and shut down. Instead, I’ve learned to speak up for myself and my work and talk things through so people see my point of view and it’s been a game changer.

There are three junior members on my team, myself included. And every time we brought an issue to our director’s attention (who is amazing btw) we would always say “not to throw anyone under the bus” or something along those lines. And one day she said, “It’s not about throwing anyone under the bus, it’s about figuring out the problem, addressing it and moving on so we can get the work done.” That to me was such a great lesson. I’ve always been a little scared to speak up or address things because I didn’t want anyone to feel like I was attacking them or didn’t want any problems. But, just because you disagree with someone’s opinion or think something can be done a different way doesn’t mean you don’t personally like someone or that they are attacking you.

I don’t care what anyone says, work relationships are so important. Number one, you spend more time with your coworkers than with your own families. You are with these people five days a week for eight hours a day, sometimes more! I think having good relationships at work puts you in such a good mind space that you’re more effective at work and you’re happier. I truly believe in that and stand by that.

And in any field you work in, you’re probably going to have to work with other people. My team for example works closely with about four different teams and act as a liaison between them. I couldn’t get my work done if I didn’t have good relationships with all of those people. It’s kind of like that you scratch my back, I’ll scratch yours mentality. There have been so many times where I’ve gone above and beyond to help someone at work and in return they’ve had my back when I’ve been in a pickle.

I’ve talked about this before, but a lot of the jobs I’ve held in the past, I’ve landed because someone helped me get my foot in the door. The reality is, getting a job is hard. You could be the most talented and most amazing person in the world and still be lost in the sea of resumes. So don’t just come to work, to work. Talk to people and build those relationships. I landed my job at Teen Vogue because someone I worked with in PR knew I wanted to break into the magazine world and recommended me when they had an opening. I interviewed for the position before it was ever posted. I’ve also made some really good personal friendships at the different companies I’ve worked for, but since this is supposed to be a “work” post, I wanted to focus on that aspect. But, my point is, don’t have the mentality that you just came here to make money, really work on building your relationships.

The other day I was listening to a podcast where RuPaul was the guest. He said “I’m really an introvert masquerading as an extrovert.” Me!!! I relate to this on so many levels. I’m naturally shy, quiet and an introvert. But when I’m at work, I’m the life of the party. It’s as if my alter ego comes out. I don’t have a name for her yet though. My director once told me that when I started I was so quiet and she was worried about me and always wondered if I was okay and now she thinks I’m sassy and says she loves seeing that side of me. Don’t get me wrong, I’m still being myself, but like a 2.0 version.

I’m naturally quiet so it’s hard for me to speak up, but I know I have to so I do. I was talking to a coworker the other day and she was telling me that her boss wanted her to speak up more, but she said that’s not who she is, she’s naturally quiet and laid-back. And my advice was literally to play the part. If everyone is telling you to speak up, speak up! You will eventually get more comfortable doing so and frankly at work you’re supposed to grow and learn so step out of your comfort zone.

And while you’re at it, leave the drama and attitude at the door. There have been so many times where I walk into work and I’m cranky because of my commute or because I got into a fight with my boyfriend, but I have to let that go and focus on where I’m at now. I have a coworker who is hot and cold. One day she’ll come in and she’s in a great mood and the next day she ices everyone out. You don’t want to be that person, the one where no one ever knows where they stand with you and if they can work with you. So again, leave all of that at the door and be the best work friendly version of yourself.

I’ve mentioned many times that one of the perks about working in fashion is that there is no dress code. But, I think there’s a fine line that has to be remembered. This past summer, our new COO flew in for the day to meet with different teams. Here we are, sitting in one of the fancy conference rooms with our COO who is dressed pretty traditional, tie and all and my coworker was wearing denim shorts and a button down top that she tied up in the front. Don’t take this the wrong way because I’m really not being bitchy and I’ve been there before. But, I think it’s important to remember that just because there is no dress code, doesn’t mean you should go crazy.

And I think that saying “dress for the job you want, not for the job you have” is actually a good rule of thumb. When you’re at work, you want people to respect you and you want your boss to look at you and see you as promotable. Yes, your work should speak for itself, but it’s also about office politics and you have to look the role as well. No one is going to trust you in a meeting or throw you into a meeting with leaders and the CEO if you’re dressed like you’re going to the club or a baseball game. So have fun with your work wear, but just be mindful of how you’re presenting yourself and making sure you don’t come across like you didn’t care enough to get dressed for work.

When I used to work with interns, we had them sign a confidentiality agreement and I actually had to monitor it. Even when I was an intern and new to the fashion industry, I would get so excited and tweet out things I probably shouldn’t have. But making sure things stay confidential is actually really important and people have lost their jobs over it.

In my current role, I’m always working one to two seasons ahead. We’re currently working on spring and I’m exposed to a lot of different products and information. A lot of the big annoucements on new launches, collections and collaborations I’ve known for months, but I can’t just casually show it on snapchat or tweet about how excited I am regardless of how many followers I have. One of the biggest things I hear is “well no one really follows me.” It doesn’t matter if just your grandmother follows you, respect the confidentiality!

I find that a lot of people who are just starting working in a corporate environment, throw out a lot of information to brag to their friends and families. That’s fine, brag all you want, but brag when the work is done and you can say something. Don’t risk your job or where you stand at work because you want to show someone you went to college with that you’re doing better than them.

I hope you guys enjoyed this post about working in a corporate environment! Thank you so much for reading! Shop my look in the widget below!