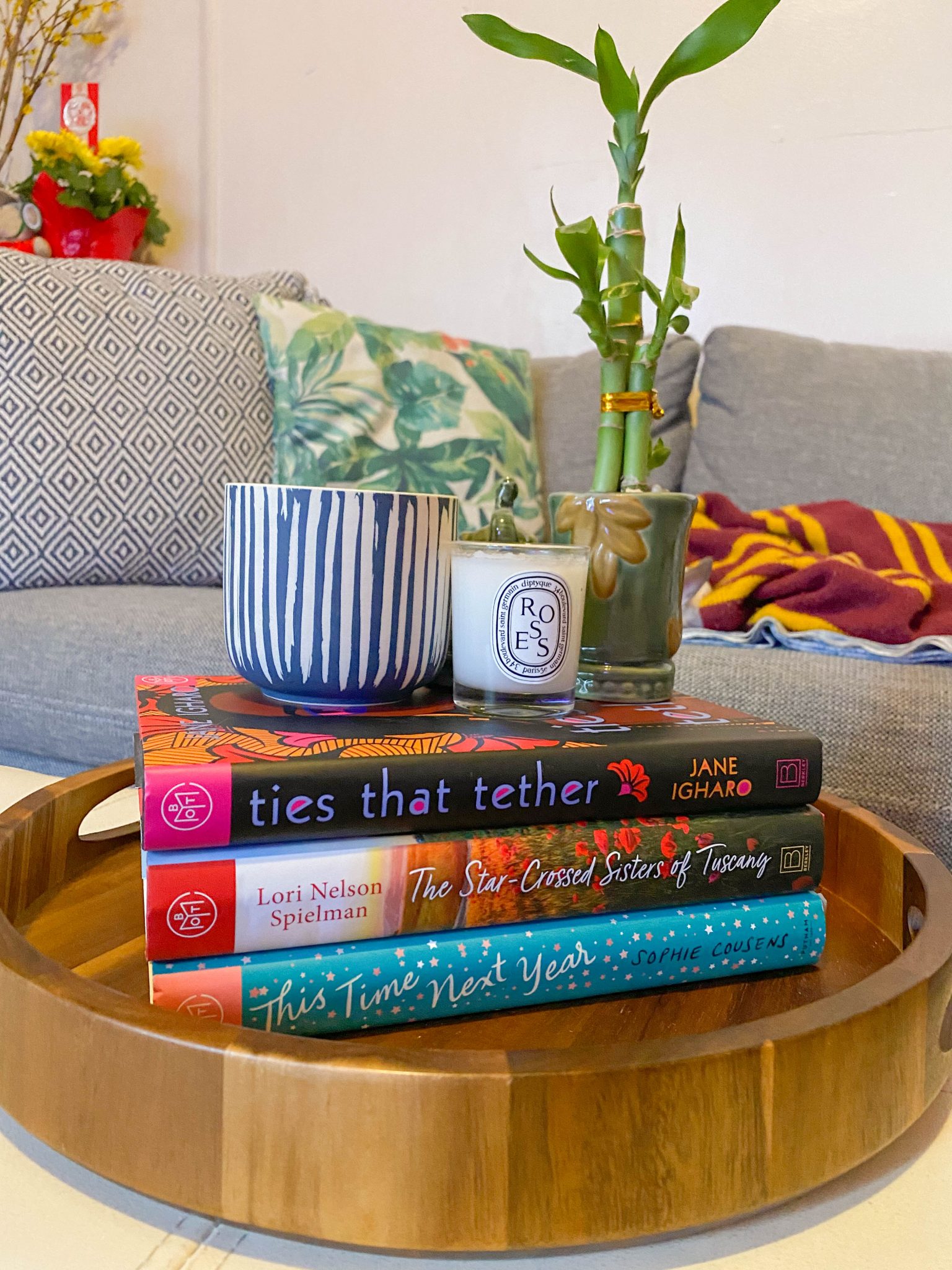 January was a slow reading month for me.

I only read 3 books in total so suffice it to say, I am currently behind on my Goodreads Reading Challenge.

But, it was a solid start to the year filled with some great reads.

Ties That Tether by Jane Igharo

I could not think of a better way to start my reading goal than with Ties That Tether by Jane Igharo. The story centers around Azere, who immigrated to the United States from Nigeria with her mom and sister as a young girl when her father passed away. She made a promise to her father that she would marry a Nigerian man to preserve her culture, but has not had a lot of luck with the Nigerian men her mother has been setting her up with. Azere ends up meeting and connecting with a non-Nigerian man and the book explores the effect this has on her and her family.

I really enjoyed the cultural aspect of this and learning about the struggles of fitting in to your new home country while trying to hold on to the country you left behind. In a time where I think we all need to step outside of our own personal bubbles and learn more about others, I enjoyed learning about the Nigerian culture and the immigrant experience. The connection between both main characters is great and I found myself rooting for both of them equally. There are quite a bit of plot twists along the way that really keep you on your toes. Overall this was a really quick read that hooked me in from the start and I thoroughly enjoyed what I read.

The Star-Crossed Sisters of Tuscany by Lori Nelson Spielman

I can not say enough good things about The Star-Crossed Sisters of Tuscany by Lori Nelson Spielman. I have talked about this book to anyone that would listen and I’m recommending it to everyone because I think everyone should read it. The story is quite complex, but in an attempt to sum it up, it centers around three second born daughters, but specifically focuses on Emilia. Her family believes in a hundred year old curse that second born daughters do not find love. Emilia works in her family’s bakery and has accepted her fate of being single forever. Her cousin Lucy, a fellow second born daughter is the polar opposite, constantly going on dates and looking for the one to help her break her curse. Emilia receives a call one day from her great aunt, Aunt Poppy, with an invitation for her and Lucy to join her for an all expense paid trip to Italy where Aunt Poppy will break the second born daughters curse. The story follows the three women as they travel through Italy to break the curse and learn more about themselves and each other along the way while trying to unpack hidden family secrets.

Believe it or not, there is so much more to the story, so much more. It is incredibly written and I could fully picture the sceneries of Italy just from what I read. I related a lot to Emilia and it was great seeing her character development along with the two other woman. While the story centers around Emilia, it also focuses on her family and the different generations. The story is heartbreakingly beautiful and by the end I didn’t know if I wanted to smile or cry. It is such an incredible story and I really recommend it to everyone.

This Time Next Year by Sophie Cousens

This Time Next Year by Sophie Cousens focuses on Minnie Cooper and Quinn Hamilton. They were both born in the same hospital, on the same year and on the same day, New Year’s Day. Minnie Cooper was supposed to be a Quinn Cooper, but after Quinn’s mother named him Quinn and won the prize money and fame for having the first baby of the year, Minnie’s mother named her Minnie Cooper. Her whole life she has credited her bad luck to her name and always suspected she would have had a more charmed life had she been named Quinn. The pair meet at a party 30 years later and throughout the book, they continuously run into each other in chance encounters, learn more about each other’s lives and connect along the way.

I really loved the premise of this book and while it was a light and fun rom-com read, it felt like something was missing and I just wanted more. The story was sweet and I really liked how the author tied in certain moments, but it just did not hook me in and I found my mind wandering several times during the course of this book. Don’t get me wrong, what I read was still a great rom-com and I really related with Minnie, but it just needed something to make it a little more exciting.